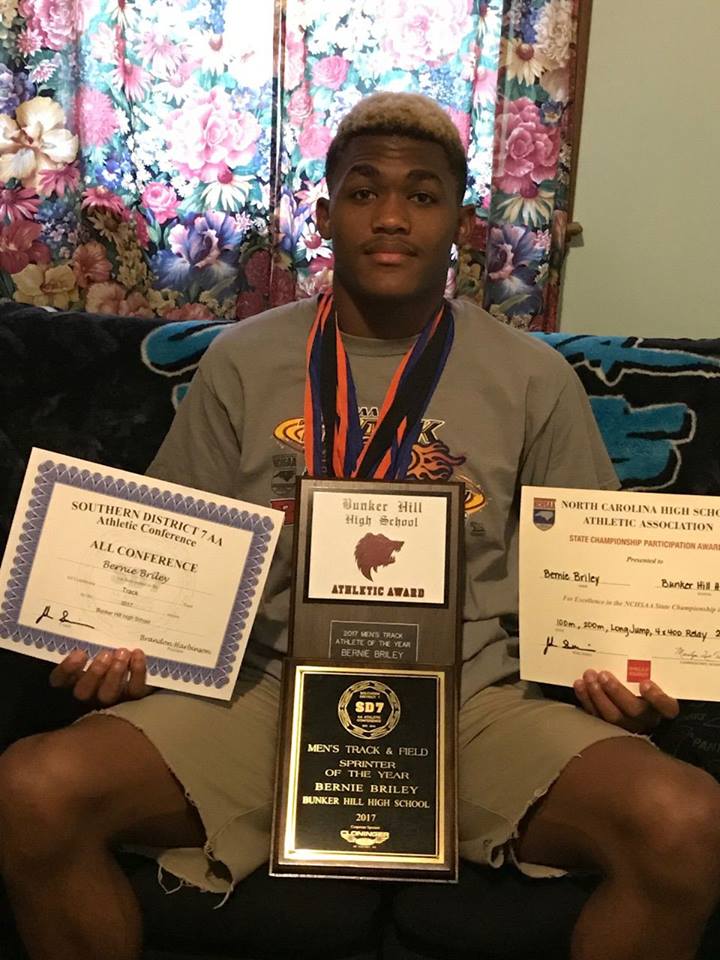 Bernie Briley was one of the top athleties last season in the Southern District 7 Athletic 2A. He’ll play his senior season at West Iredell after his family moved to iredell County./FACEBOOK PHOTO

“If you (opposing defenses) focus on one player, you’re going to hurt yourself,” Simmons said Monday — the opening day of practice — of having former Bunker Hill star Bernie Briley on his roster for the 2017 season.

The family has moved into the West Iredell school district, and Briley will play his senior year for the Warriors. They open Aug. 18 home against the Hickory Hawks.

Briley, who will play A back in the Warriors’ veer option and also in the defensive secondary, can alone be a key offensive threat (see his stats), but the mix he’s entering is what has Simmons upbeat.

Said Simmons: “I’ve got three running backs and he (Briley) is in the top three. It’s good that I’ve got two behind him that are just as good… It adds to our depth. We won’t be one-dimensional.”

Not by a long shot as the Warriors try to improve from 0-11 in Simmons’ first season and from 3-8 last year with victories over St. Stephens, Bunker Hill and North Iredell.

As a freshman, he ran four times for 95 yards and two TDs (35, 62yards) in the final game of the season against West Caldwell.

Briley blossomed as a sophomore starter with 178 carries for 902 yards and six scores. He threw for 383 yards and two TDs and caught two passes for 47 yards for 1,332 yards of total offense.

Last season, when the Bears went 1-10, he had 510 yards of total offense (doesn’t include the Bears’ opener against North Stanly, a game stats aren’t available for).

Briley now goes into a West Iredell backfield that includes returnees Dillan Davis at quarterback and running backs Keenan Bunch and Jecovien Lynch. The Warriors also have two other backs who can contribute, including Emmanuel Long, a 210-pound promising sophomore, Simmons said.

Davis ran for 613 yards and six TDs last season and threw for more than 1,000 yards and 12 scores. Burch and Lynch combined for about 600 rushing yards and eight TDs.

“You have to focus on the whole offense now,” said Simmons, a longtime assistant coach at Hibriten before becoming head coach at West Iredell in March of 2015.

Simmons said defenses will have to deal with a more balanced offense to defend. “It isn’t just fast (speed).

“If it was (having) Briley, a defense could cheat (up)” in a formation to try to neutralize Briley.

The Warriors are moving from a zone option offense to the veer, putting Davis back up under center (they have been running from the shotgun).

“I think this will be good for us, for the morale of my team,” Simmons said of having a star player move into the area.

West Iredell will play in a new league because of statewide realignment, leaving the North Piedmont 3A-4A for the Northwestern Foothills 2A with Bunker Hill, Draughn, East Burke, Fred T. Foard, Hibriten and Patton.

“A lot of people are talking… that the league is not that strong,” Simmons said. “Patton, Hibriten and us… there are gonna be some battles.”

A look at the unofficial career varsity football stats for Bernie Briley, who played three seasons at Bunker Hill and will play his senior year at West Iredell:

*does not include yardage total versus N. Stanly