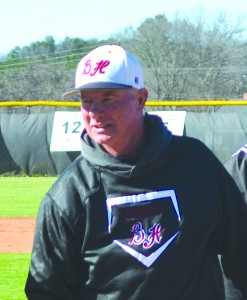 CLAREMONT – Given his love of baseball, being as close to the action as possible was something Marty Curtis insisted on before becoming the head coach at Bunker Hill High some 35 years ago.

Curtis, 67, said Friday his long coaching career at ‘The Hill’ is over – he’s retiring after spending 35 of his 46 years coaching baseball there – and he had a great seat for the ride he took and the ride he took the Bears’ baseball program on.

He won 455 games at Bunker Hill (and 750 as a junior varsity head coach and American Legion head coach), and the next Bears boss will be gunning for the program’s 11th straight bid into the state baseball playoffs.

When Curtis left St. Stephens as JV head coach to head to Bunker Hill, the Bears had never been to the state playoffs and their last winning season had come in 1976.

Back then, the baseball field on campus at Bunker Hill had pretty much a rolling hill on the left side and the Bears’ bench sat atop that hill (not far back of where the current home dugout is).

Curtis told a story on Friday of what he remembered when then-principal Mike McRee asked him to come to Bunker Hill.

“We were out on the baseball field, looking at the facilities, which were poor at that time,” Curtis recalled in an interview with HobbsDailyReport.com. “The players and coaches sat on that bank on benches.

“I told him (McRee) if I was going to take the job at Bunker Hill, I was not gonna sit on that bench. He promised me he’d have that bank graded before the (1984 season) … so we could at least sit down at field level.”

As Curtis heads to retirement, the Bears have a beautiful and well-kept baseball stadium – named M.M. Curtis in their head coach’s honor in 2004 – and a baseball program that was guided by one of the region’s best ‘baseball’ guys and one of the best guys/coaches, period.

The Bunker Hill baseball program, if you look much closer, is as good of an example of how a solid high school athletic program can be built.

The Bears have won more baseball games in the last 10 seasons (192) than everyone in the region except South Caldwell (233). But they were 3-41 after Curtis’ first two seasons there, and it took Curtis five seasons to get a team to the state playoffs and 13 for the Bears to finish with more wins (14-13 in 1996) than losses.

“I wanted to be a head baseball coach,” Curtis recalled Friday, talking about one reason he came to Bunker Hill – the other being that Tom Brown wanted him as a football assistant coach. “I looked at it (baseball) as an opportunity to build something, to put my stamp on it. I thought it was a place I could build a program …(and) basically start from scratch.”

Working closely with others, Curtis helped get more youth baseball being played in the Claremont community and, over time, that and things like getting a direct line of talent from a single middle school (River Bend) began to reap big benefits.

Curtis said prior to River Bend, the elementary school baseball program sent some of its players to Bunker Hill and some to Bandys. Some years, based on where the kids lived, the Bears got the better players and some years the Trojans did.

“The youth programs (Optimist) had just gotten started in the mid-90s,” Curtis said. “They started to develop, which has really been a plus, and we started to build some tradition and making baseball important and we started having some success.”

Still, it was a long road.

After going to the state playoffs five times in six seasons from 1995 through 2000, the Bears then missed the postseason for the next eight years after having a winning season in 2001 and then seven straight losing records.

Curtis’ baseball philosophy has always remained consistent and his steady hand brought his first vision – “I thought it was a place I could build a program” – into focus.

“I guess my overall philosophy was to try to teach the fundamentals and the winning and losing would take care of itself,” said Curtis, who learned them at Granite Falls High while playing football (end in the Single Wing) for Don ‘Red’ Kirkpatrick, whatever position the late Wayne Kirby and late Bernard Noble told him to play in basketball, and pitching and playing outfield for the late Sinclair Deal. “I always felt that to be good you had to have good pitching and defense. My general idea of coaching baseball was if I could teach the fundamentals the winning and losing were gonna take care of themselves.”

Curtis leaves with a prep baseball winning percentage of .521, and he did not get above .500 until the 2015 season. But his impact on baseball in the region can’t really be measured by statistics or numbers, and I’m here to tell you there will never be another Marty Curtis.

Because of so many different changes and so many different factors, we’re not going to see high school coaches like Curtis and Hickory’s David Craft (30 years), South Caldwell’s Jeff Parham (18 years) or Alexander Central’s Pete Hardee stay in the game. Void of those guys, the longest on-the-jobs guys in area prep baseball for at least 10 seasons are Corey Nunley of Newton-Conover (14), Chris Matile of East Lincoln (12) and Channel Vogel of Fred T. Foard (10)

Curtis helped keep baseball — not only at Bunker Hill but generally everywhere — a viable thing for fans to do on an afternoon or night during the spring.

So why leave now, Curtis was asked.

“In most high school athletics, it’s almost become year round. As a coach, you’ve always felt you gotta do all the little things – fall workouts, summer baseball, camps. You’ve got to do all those things most people don’t see and all those other things that go year round.

“It’s gotten harder and harder for me to keeping doing all those little things. And I’ve always said if you weren’t willing to do all those things, to give 100 percent, then it was probably time to get out.

“If you find yourself not wanting to go to practice on a particular day or to fall workouts. To me, if you catch yourself doing those things,” it might be time to move on.

“I love the strategy and to compete and teach the game, and that’s probably the thing I will miss the most – teaching the game.”

Curtis said he’ll still stay close to the game he loves – you’ll see him at Bunker Hill games, athletic events of other schools and at American Legion games – but 46 years doing one thing is… well, 46 years.

“There comes a time,” he said, trying to sum up his decision. “And I feel like this is my time. I’ve had 46 good years, a good career.

“But it’s time for me … there comes a time and place, and I feel like my time has come to an end.”

The best response to that, for all area baseball fans, is probably a simple-two word comment post on HobbsDailyReport.com by veteran baseball umpire Bill Cline, who worked hundreds of those Curtis-coached games, as he reacted to the news.

HobbsDailyReport.com owner and writer Chris Hobbs, who loves baseball at all levels, is completing his 43rd year — in five different decades — of covering area high school baseball with that coverage including all 35 seasons Curtis spent as head coach at Bunker Hill.