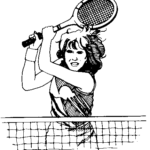 The state 2A tournament is Friday and Saturday at Cary Park and the 3A title tournament is on the same days at the Burlington Tennis Center.

Headed to Cary are Bandys’ Toni Laney and Newton-Conover Alexa’s Allison after qualifying finishes in the West 2A Regional last week at Shelby.

Laney was West 2A Regional runner-up, falling 6-2, 6-1 to Hendersonville’s McCullough Perry in the final.

Foard and Maiden have doubles teams in the state 2A tournament – Alexis Woglemuth and Hannah Cummings for the Tigers and Gracie Arrowood and Hannah Sherrill for the Blue Devils.

In predetermined first-round matches, Woglemuth and Cummings meet Samantha Davis and Arial Pearce of North Johnson while Arrowood and Sherrill get Grace Burrows and Katie Smith of Croatan in the opening round.

Hickory doubles partners Ellie Holtzman and Jonellis Heredia qualified for the state tournament by their finish at the West 3A Regional in Hickory.

Jadyn Kaydyk of Watauga won the West 3A singles, defeating Madelynn Frye of Kings Mountain in the final.

No 4A players from the region qualified for the state 4A tournament scheduled Friday and Saturday at Millbrook Exchange Park in Raleigh.