spent 16-plus years as boss at 6 schools

Editor’s note: All stories at HobbsDailyReport.com are copyrighted and can’t be republished or rebroadcast — other than by WNNC and WLON, our reporting partners — without crediting HobbsDailyReport.com’s reporting and/or research or by requesting a waiver of that copyright. To inquire about a waiver, e-mail chobbs001@att.net.

CATAWBA – Jason Barnes and his Bandys High coaching staff are enjoying preparing for the 2022 football season and often hearing a new voice sharing a new wrinkle or outlook. 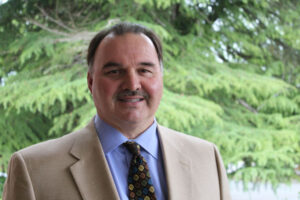 Helms resigned after seven games at Hickory in the 2014 season (1-6) – soon after a two-point loss at South Caldwell – and he was replaced by Forrest Blake, an HHS assistant who had previously been on staff at Bandys.

At Bandys, Mike Helms joins a staff that includes his son, Brandon (the Trojans’ varsity boys’ basketball head coach), who Barnes said will be head coach of the Bandys junior varsity football team this season.

“(He) is doing great for us,” Barnes said Wednesday of Mike Helms, who coaches offensive line and is run game coordinator. “He fits in well with our changing staff and is a breath of fresh air and a change-up that we have needed.

“We are all learning from him and he is different than we are used too … and we need to be a little different in order to be better.”

Barnes said it has especially been refreshing Mike Helms speaks up if the Trojans are running a play in practice or the coaches or sitting around talking strategy and/or life-coaching experiences.

“That (interject) is what we are looking for him to do,” said Barnes, who praised Helms’ approach to being a veteran coaching working at a new school. “He’s a tremendous help and not just in Xs and Os.”

Mike Helms has an extensive football background, as a star in high school at Hunter Huss and at LRU, as an assistant prep coach, and then 16-plus years as a head coach at East Burke (2 years), Cherryville (1), West Charlotte (1), Northwest Cabarrus (7), Freedom (3) and Hickory (19 games).

His teams went 110-93, nine of them finishing with winning records and two went .500. He had five 10-win teams and 11 in the state playoffs (Freedom’s 10-1 team in 2011 was not postseason eligible because of fighting regulations).

Mike Helms’ career record of 110-93 includes a forfeit win and six forfeit losses in 1997 while coaching at East Burke.

Only three of the current head football coaches in the Greater Hickory area leagues have more career wins than Mike Helms. The win leader in the CVAC 2A is Derrick Minor of East Burke (56 with Fred T. Foard and the Cavs).

This is Barnes’ third year as head coach at his alma mater. The Trojans are 4-11 under Barnes, going 1-6 (sixth place) in the Catawba Valley 2A Athletic and 3-6 overall last season.

Bandys scrimmages at Lincolnton on Friday night in the Lincoln County Jamboree and opens the season Aug. 19 at St. Stephens.

Based on unofficial records that are currently being thoroughly reviewed, Bandys has already reached 400 varsity football wins (last October at West Caldwell).