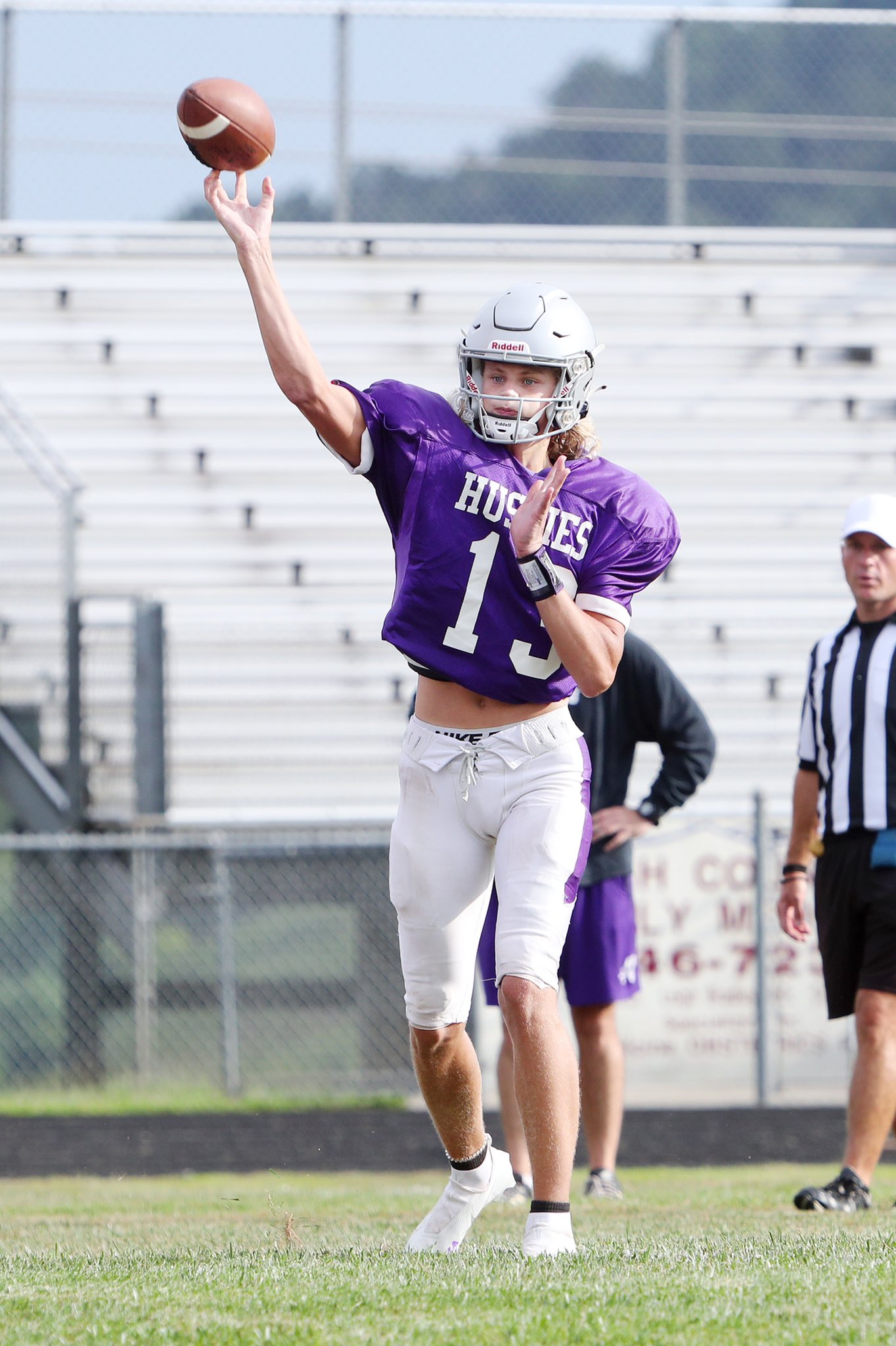 Wesley Thompson, a 6-foot-5 senior whose family moved to Maiden earlier this year, has had his athletic eligibility confirmed and has been at quarterback in 7-on-7 drills for the Blue Devils. They are at home on Wednesday (6 p.m.) in a scrimmage with Hickory. Thompson is expected to be Maiden’s starting quarterback this season, and the Blue Devils’ first game is Aug. 19 at Fred T. Foard. He threw for nearly 2,000 yards and 16 touchdowns last season as the starter at Ashe County./TWITTER PHOTO

Editor’s note: All stories at HobbsDailyReport.com are copyrighted and can’t be republished or rebroadcast — other than by WNNC and WLON, our reporting partners — without crediting HobbsDailyReport.com’s reporting and/or research or by requesting a waiver of that copyright. To inquire about a waiver, e-mail chobbs001@att.net.

Thompson threw for nearly 2,000 yards as

a junior, is expected to start for Blue Devils

MAIDEN – Maiden High’s next starting quarterback has a clear path to play, has played the position in recent 7-on-7s, and is expected to be under center on Wednesday night when the Blue Devils scrimmage at home against Hickory.

He and his family moved from West Jefferson to Maiden in late February, and his athletic eligibility was in limbo and under review at one point by Catawba County Schools (CCS).

On Wednesday, Maiden principal Brian Hefner confirmed Thompson is again enrolled at Maiden, has been at quarterback during 7-on-7s and is practicing with the Blue Devils.

Multiple sources — all of whom requested anonymity — told HobbsDailyReport.com the eligibility decision on Thompson ultimately rested with Maiden High officials.

Those sources said the NCHSAA — told by CCS officials its input was not needed in another eligibility case involving Maiden that prompted an appeal of a court ruling – declined further involvement with the Thompson case.

At that point, the sources said, Thompson’s eligibility was turned back over by CCS officials to Maiden’s athletic department to review and make a decision.

Thompson has been active in football workouts and drills since Maiden started preparing for the 2022 season.

Blue Devils head coach Will Byrne has acknowledged Thompson is with the Blue Devils but declined further comment.

CCS officials earlier told HobbsDailyReport.com individual employees would not comment on athletic eligibility matters at Maiden and directed all questions to the CCS legal staff.

Once Thompson began official practices on Aug. 1, HobbsDailyReport.com was directed by CCS’  legal contact to ask Maiden officials for clarity on Thompson.

Hefner confirmed basic enrollment information on Thompson but said he could not discuss anything additional about the Blue Devils’ new player.

Thompson played two seasons at Ashe County (7-1, 1-8 records), appearing in five games as a sophomore on a Mountain Valley 2A title team and playing in nine games last season when the Huskies finished sixth (0-5) in the Northwestern 3A-4A.

Stover, the son of CCS Superintendent Dr. Matt Stover, has moved to wide receiver on the varsity roster.