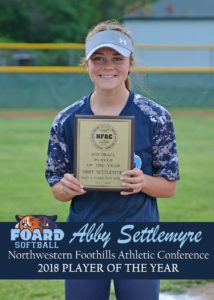 CHICAGO – The best high school softball player in North Carolina for the 2017-18 school year is from Catawba County.

Fred T. Foard shortstop Abby Settlemyre — who hit .698 with eight triples, 26 stolen bases and 41 runs scored this season – has been named the state’s No. 1 player by Gatorade.

Gatorade has selected the top player in each of 50 states and one from the District of Columbia for 33 years.

State winners are selected based not only on outstanding athletic excellence but also high standards of academic achievement and exemplary character demonstrated on and off the field.

Settlemyre is now a finalist for the Gatorade National Softball Player of the Year, which will be announced later this month.

She is a two-time all-conference player and all-district and all-state each of the past three seasons.

Settlemyre is also a member of the Fellowship of Christian Athletes and Foard’s student leadership club and has volunteered locally for clothing-donation drives, Habitat for Humanity, youth softball camps and worked in a middle school tutoring program.

She has a weighted 4.62 grade point average and has signed to play college softball at North Carolina.

As a state winner, Settlemyre gets to select a national or local youth sports organization to receive a $1,000 grant as part of Gatorade’s Play It Forward program. State winners also have an opportunity to add another $10,000 spotlight grant by writing a brief essay in support of the organization they select.

For more information on Gatorade’s Player of the Year program, including nomination information, a complete list of past winners and the announcement of the national award, visit www.http://playeroftheyear.gatorade.com.