Newton-Conover is back on the field 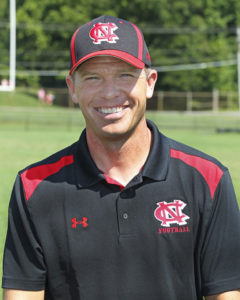 DENVER, N.C. – East Lincoln High has added a wide receiver coach to its varsity football staff who is well-known for his passion for the game and success.

Matt Beam, whose head-coaching stints include Burns, North Lincoln and Newton-Conover, posted on Facebook his decision to get back in the game and do it with the Mustangs.

“I didn’t know it was news but I have accepted a coaching offer at East Lincoln coaching the wide receivers,” Beam’s post said. “I’m excited and it’s really nice to be back out on the field. Stay tuned. This group has a chance to be good!”

He left coaching after the 2017 season and started a family business in Lincolnton.

The Mustangs were 5-2 in a spring season (because of COVID) and they won four of their six South Fork 2A games but had a streak of 15 straight years in the state playoffs snapped.

East Lincoln has moved up to 3A in the statewide realignment that begins in August and will play in the Western Foothills 3A with Fred T. Foard, Hickory, North Iredell, North Lincoln, St. Stephens, Statesville and West Iredell.

The Mustangs’ season-opener is Aug. 20 at Hibriten.

Among the top underclassmen on the East Lincoln roster, expected to return, are quarterback Tyler Mizzell and wide receiver Markell Clark.

Mizzell’s unofficial statistics from 2020 were: 85 of 134 for 1,173 yards with 13 TD passes and two interceptions, which makes him the top returning passer in the Western Foothills 3A.

Clark ranks second among returning pass catchers in the new league at 23 catches for 271 yards and three TDs (38.7 yard per game). Only Hickory’s Rico Walker (16-398, 56.8 yards per game) ranks higher than Clark.