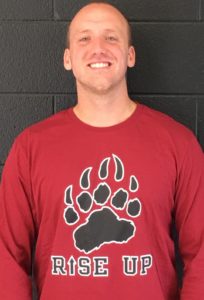 DYLAN JOHNSON
Details on Dylan Johnson, the new varsity boys’ head basketball coach at Bunker Hill:
Age: 28.
High school: 2009 graduate of North Wilkes… played sports as freshman and senior at North Wilkes and at Canton Pisgah as a sophomore and junior, playing all of those seasons for his father, Tommy…was a shoot guard in basketball and played one season of football, as a QB, as a freshman at North Wilkes.
College: Played shooting guard for one season at Methodist College and one season at Catawba Valley Community College, then two seasons at Warren Wilson College with final season 2012-13… Warren Wilson’s 2013 team won a United States Coaches Athletic Association (USCAA) national title.
Coaching: Spent one season as an assistant basketball coach at Warren Wilson College … Was an assistant football coach for one season and varsity boys’ assistant coach for two seasons at Fred T. Foard… Worked two years as head girls’ varsity coach at West Brunswick (26-26), coaching two state playoff teams with his last team winning 16 games (both years made state playoffs), the most for West Brunswick’s girls in 15 years… Was head indoor and outdoor track and field coach last year at Wilkes Central, where he was also a football assistant coach and associate athletic director.
Family: His father, Tommy, has retired after a long prep basketball coaching career with more than 500 wins at Wilkes Central, North Wilkes, Canton Pisgah, Robbinsville and Perquimans… his younger brother, Ty, will be in his first year as head boys’ coach at Cox Mill, leaving West Brunswick to take that job.

CLAREMONT – As a second generation head coach from a basketball family, Dylan Johnson doesn’t hesitate when asked what to tell fans of his next team to expect.

He’s been named head boys’ varsity coach at Bunker Hill High, with his teaching contract approved on Monday night by the Catawba County Schools Board of Education, and he’s already fired up about what’s ahead.

He starts as a physical education and science teacher at Bunker Hill on Monday.

Johnson’s dad, Tommy, won more than 500 games — the majority of them while head boys’ coach at Wilkes Central with a colorful, easy-to-remember style – and Dylan Johnson says he’s a lot like his old man.

“I’m a very passionate coach,” Dylan Johnson said on Tuesday. “I’m kinda of like dad. Give me effort and I’ll teach ya the Xs and Os.

“I want us to get to every loose ball, that sort of thing. It (the game) doesn’t have to be complicated … to get the most success.

“I want to be the highest energy (person) you see in the room. I’m passionate about whatever I do.

“I will never be outcoached… that’s the way I teach” and prepare players.

He taught and coached at Fred T. Foard – working football with head coach Tom Harper in 2015 – and was a varsity boys’ basketball assistant for two seasons.

While working at Wilkes Central, he continued to rent his Conover home out and lived in Wilkes County.

When Joines resigned, the Conover home was still being rented. When Swanson made his move, Johnson said he didn’t have a tenant and thought the timing was perfect to get in the mix of potential head boys’ coaches at Bunker Hill.

“I was happy at Wilkes Central,” Dylan Johnson.

But when he began to research to get a feel if the Bears can be competitive annually in the Northwestern Foothills 2A, the job appealed to him even more.

“After seeing that and that it (the school) has a good administration … (and) my goal was to be a head coach again, I knew it was the best move for my family.”

Johnson’s family includes a younger brother, Ty, who after coaching the boys’ varsity at West Brunswick has moved to Cox Mill, and this season will be his first there.

Dylan Johnson will be only the sixth boys’ head coach at Bunker Hill since 1980 (see graphic). The others: the late Mark Carter, Bobby Lutz, Jim Woodruff, Matt Wilkinson and Swanson.

The Bears went 16-11 last season overall and 9-3 in the Northwestern Foothills 2A, tying Hibriten for second place. That was Bunker Hill’s top boys’ finish since its West 2A championship team in 1988-89 (24-7) finished second in the Southern District 7 2A under Woodruff and matched the most wins since that team (16-8 by the 1999-2000 Bears).

A look at the five other head coaches of Bunker Hill High boys’ varsity basketball, with Dylan Johnson becoming the sixth since 1980:

Notes: The last season for Carter, who is deceased, was in 1982-83 … Woodruff replaced Lutz in 1984-85 and his final season was 2003-04 … Wilkinson is now head boys’ coach at Newton-Conover … Swanson left the boys’ job to become Bunker Hill varsity girls’ head coach, and he was previously head boys’ coach at South Caldwell.