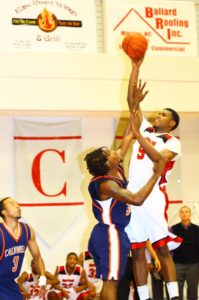 Jalen Cannady (5), who averaged double figures in his career while playing for Catawba Valley Community College (CVCC), will be back with the Red Hawks next season as an assistant coach./CODY DALTON, CATAWBA VALLEY ATHLETICS

HICKORY – Jalen Cannady, a career double-figure scorer while playing at Catawba Valley Community College (CVCC), is returning to the school as an assistant men’s basketball coach.

Cannady averaged 10.3 points and 6.6 rebounds in a 49-game career with the Red Hawks.

Earlier this summer, Cannady found out about an assistant’s opening at CVCC through Garmroth and reached out to his former coach about the position.

“I’ve always had a great relationship with Coach Garmroth,” Cannady said in the press release. “I enjoyed my time here at CVCC so I wanted to come back and help the young men that are coming along and teach them some of the things that Coach Garmroth and (former CVCC assistant) Coach (Julian) Larry taught me.”

After graduating from CVCC, Cannady played in 16 games at North Carolina Wesleyan College, where he averaged 7.1 points and 3.5 rebounds per game.

Cannady served as a student assistant coach at Wesleyan during the 2015-16 season — his final with the Battling Bishops — and he was immediately drawn to the coaching profession.

“I just loved it,” Cannady said. “I wanted to pursue playing, but things didn’t go the way I wanted them to.

Seven months after graduating Wesleyan, Cannady attempted to play professionally for the Five Star Sports organization in Shenzen, China, but ended up continuing his coaching career overseas instead with the organization during the 2017 season.

CVCC is coming off a 22-9 record last season that including going 13-7 in Region X.

“I know where we’ve come from when Coach Garmroth first started,” Cannady said. “I was one of the first recruits for coach Garmroth his first year here.

“To see how the program has grown and how it’s gotten to the level it is at now is just great.”

Coaching is in Cannady’s bloodlines. His uncle Kenya Hunter, who has coaching experience at Nebraska, Georgetown, Xavier, Duquesne and N.C. State, is an assistant men’s basketball coach at Connecticut.