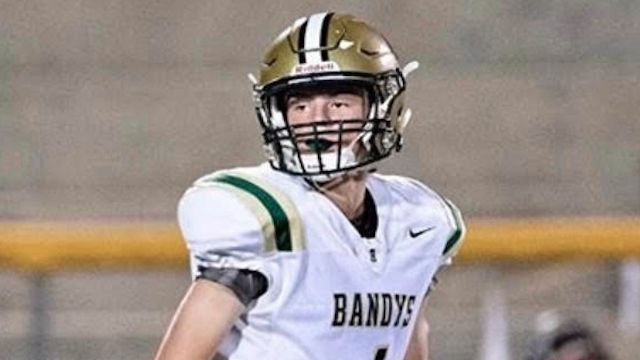 Trey Shearer, who averaged nearly 100 yards of total offense as a starting quarterback at Bandys High as a sophomore, won’t be back with the Trojans this season. His family is moving back to Rutherford County and he is already working out with the football team at R-S Central./YOUTH1 PHOTO

of total offense as a sophomore

CATAWBA – Trey Shearer, who averaged nearly 100 yards of total offense per game last season for Bandys High, won’t be back in the Trojans’ lineup this season.

Guy Shearer, Trey’s dad, said Thursday the family is moving back to Rutherford County, and Trey is working out with the R-S Central varsity football team and his sister, Natalie, will play for the Hilltoppers in volleyball. She is a freshman.

Trey Shearer was a rising sixth-grader when his family moved from Rutherford County to Catawba County.

Trey Shearer’s unofficial totals for Bandys (1-5 in the spring) were 38 carries for 143 yards rushing with one TD and he completed 41 of 86 passes for 448 yards with three TDs and 10 interceptions. He averaged 98.4 yards per game of total offense.

His statistical totals would have ranked him ninth in returning rushers in Bandys’ new league — the Catawba Valley 2A Athletic Conference — and he would have had the fourth-highest passing yards per game average in the league.

In two-game stretch against East Lincoln and West Lincoln, Shearer was 18 of 37 for 245 yards with four interceptions and two scoring passes.

Bandys opens the season on Aug. 20 at home, facing St. Stephens in the debut of former Trojans assistant Kyle Lowman.

Guy Shearer said his son may or may not play quarterback for the Hilltoppers.