Newton-Conover High got in gear in the second half on Friday night and beat Hickory 31-6 in varsity football, winning at Barger Stadium for the fifth time in the last six visits.

The Red Devils (2-0) led 3-0 at halftime and got a 49-yard scoring pass from Justice Craig to Zane Redmond in the opening minutes of the second half to extend the lead.

Running back Allen Wilfong ran for a TD and more than 170 yards and Allan Shade added two rushing TDs for the Red Devils, who have 11 wins in their last 15 games against Hickory (0-3).

Newton-Conover and Hickory battled for the 30th time since 1980, and the Red Devils are 19-11 in those games.

Running back Cody Young had nearly 200 rushing yards in the loss for Hickory, which beat Newton-Conover 35-6 a year ago despite Wilfong’s 147 yards rushing.

Quarterback Ethan Rhodes threw for 281 yards and had long scoring passes to Brennan James and Dylan Abernethy as the Blue Devils (2-1) beat the Bears for the 30th straight time.

Coming off a 14-13 home loss to South Caldwell, the Blue Devils were dominant against Bunker Hill (0-3).

Rhodes’ TD passes included 55 and 84 yards to James and 37 and 75 to Abernathy, who finished with 138 receiving yards.

Kaden Robinson had a 76-yard kickoff return for Bunker Hill, which grabbed an early lead on a 1-yard run by quarterback Carson Elder. 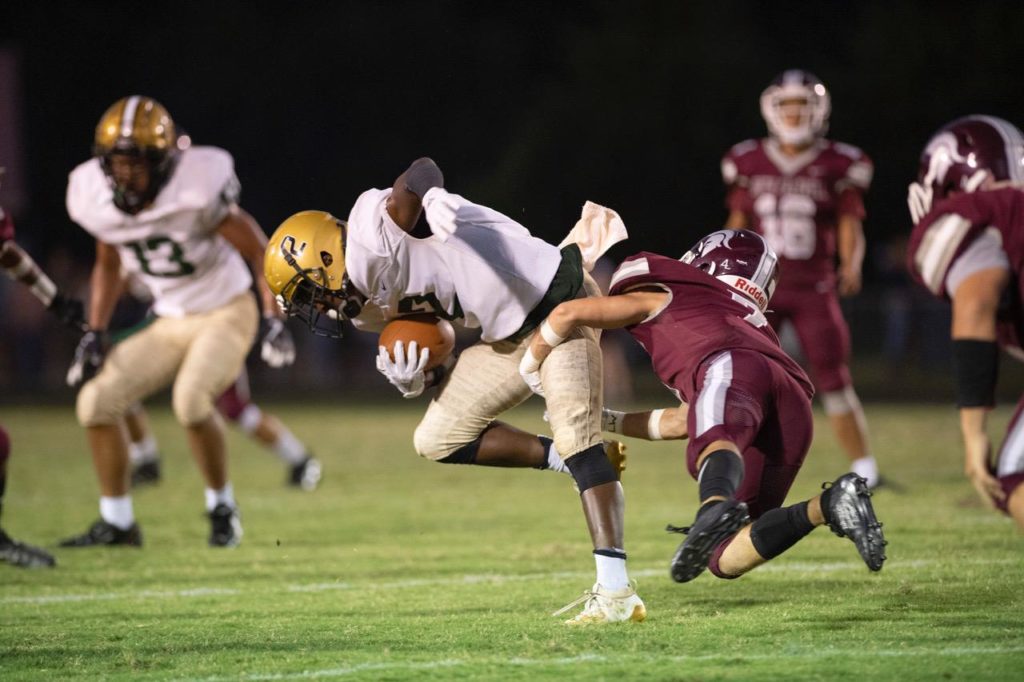 Bandys running back Malik Kennedy (2) ran for 26 yards on Friday night in a 34-24 win at South Caldwell that included a key score on a 12-yard run in the third quarter that opened the lead to 21-8. The Trojans (3-0) ran for 304 yards./MICHELLE THOMPSON PHOTO

The Trojans (3-0) remained unbeaten, handing the host Spartans their first loss, after two quick scores in the third quarter opened a 20-point lead.

Bandys led 13-8 at the half and scored on a 12-yard run by Malik Kennedy with 8:17 left in the third quarter, with a two-point conversion run by Isaiah Gilchrist stretching the lead to 21-8.

On the ensuing kickoff, the Spartans’ Isaiah Kirby fumbled at the end of a return and Chris Culliver recovered for Bandys at the South Caldwell 34. Five plays later, Quenten Maddox ran 3 yards for a TD and Jessie Pope’s PAT made it 28-8.

The Trojans led 34-14 when quarterback Parker DeHart intentionally ran out the back of the end zone, giving the Spartans a safety.

With 40.9 seconds to play, South Caldwell running back Spencer Piercy (20 carries for 145 yards) scored on a 12-yard run and caught a two-point conversion pass from Avery Raynor.

Xander Pendergrass ran for 88 yards on six carries and scored twice as the Rebels (2-0) rolled at home by scoring 62 unanswered points.

Grayson Barkley ran for a TD and recovered a block punt in the end zone for another score for the Rebels while Hunter Leonhardt had a 35-yard punt return TD and the game’s final score, with 10 minutes to play, on a 45-yard run. 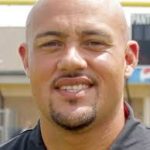 Freshman Reed King threw for two TDs and Dejarris Gash dashed 60 yards for a TD on an interception return, leading the Wolves (1-2) to their first victory under head coach Joe Glass.

Bernard Wingate had a 10-yard scoring run for visiting Lincolnton before King threw 14 yards to Isaiah Bostic for a TD.

The Knights scored on their first five possessions and rolled past the Warriors (0-3), who have lost 17 straight games.

North Lincoln (2-1) scored in a wide variety of ways, including via a safety, fumble recovery in the end zone and an interception return for a TD.

Defensively, North Lincoln had four interceptions and held the Warriors to five first downs – one first down coming via a penalty.

North Lincoln head coach Nick Bazzle improved to 12-5 since returning to Lincoln County and to coaching. He is a former East Lincoln star athlete.

— Reported by W.D. Fisher for HobbsDailyReport.com

The Mustangs (2-0) won in Gastonia, throwing for two scores and getting a 4-yard TD run by Cole Barber with 11 minutes to play that gave them a cushion.

Last season, in a 30-14 victory, the Mustangs threw for two TDs.

The victory pushed head coach David Lubowicz’s record at East Lincoln above .500 at 14-13.

The Mustangs are 39-17 since they won a state title with an undefeated team in 2014.

Visiting Union County scored 14 points in each of the first two quarters, leading 28-8 at halftime, en route to a victory over Lake Norman Charter (0-3).

The game was added to Lake Norman Charter’s schedule about two weeks ago, filling an open date.

No game details were available.