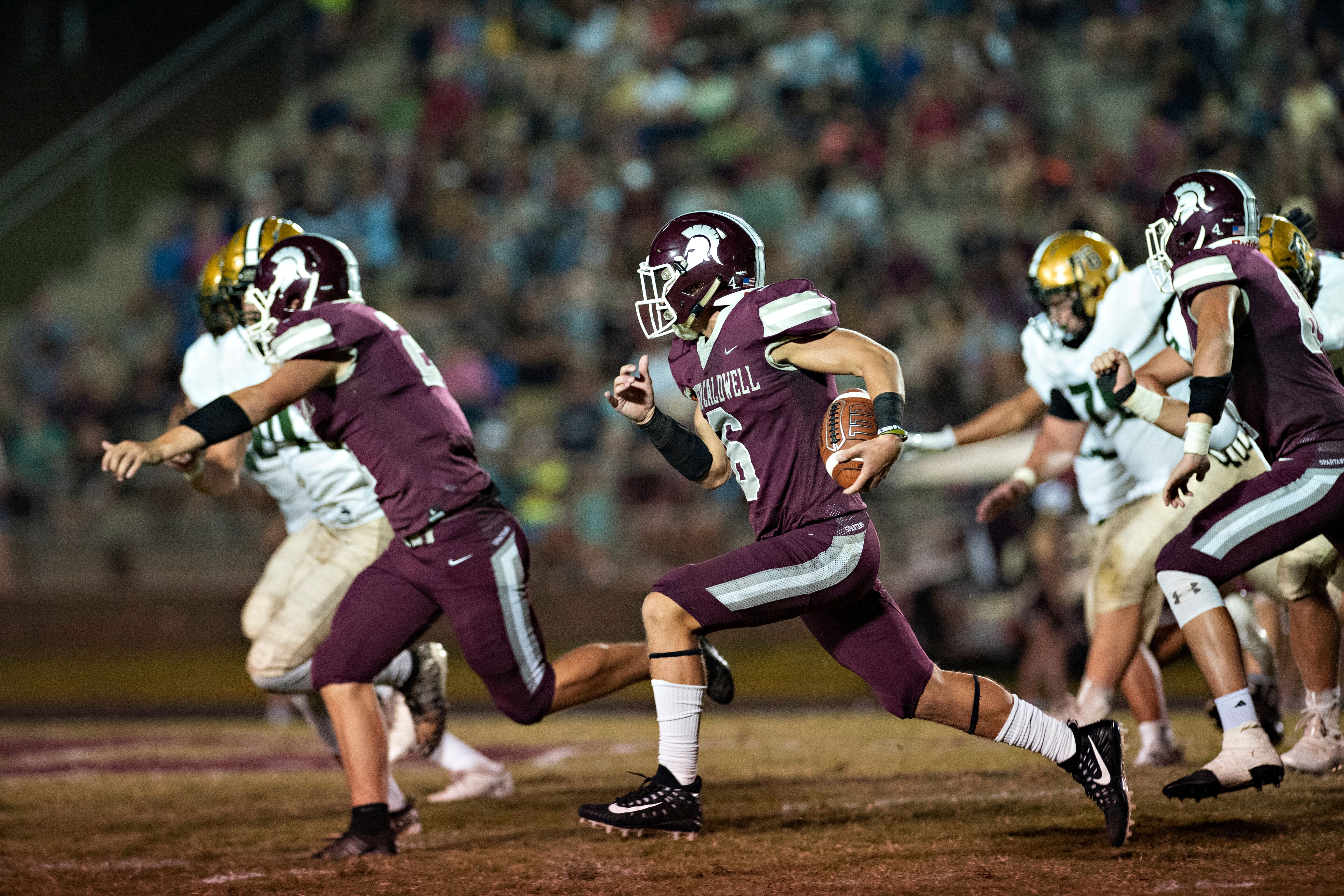 South Caldwell running back Spencer Piercy (6) finds some running room on Friday night in the Spartans’ home game against Bandys. He had a game-high 145 yards rushing in a battle of unbeatens won 34-24 by Bandys./MICHELLE THOMPSON PHOTO

The Patriots won 56-7, picking up another Fat Friday win, and improved to 2-1 as Birchfield threw for 221 yards and four touchdowns and ran for another score.

East Burke (1-2) got its only score in the fourth quarter via a 4-yard pass from Brett Childers to Luke Coble.

Birchfield accounted for seven scores a week ago – six passing and one rushing – in a 60-14 victory at Draughn. The six TD throws are a Burke County single game record and he has 10 TD passes this season.

Sophomore Eliseo Rameriz’s 25-yard field goal with 1:27 left in the third quarter was the game’s only score.

McDowell had only two plays of 10 or more yards and could not get its running game going. Quantavian Moore, who had 154 yards in a victory a week ago against East Burke, was held to 17 yards on 10 carries.

The Panthers beat the Titans for the second straight year in Marion. The endowment game was originally schedule at Patton but moved to Marion.

Newton-Conover got in gear in the second half on Friday night and beat Hickory 31-6, winning at Barger Stadium for the fifth time in the last six visits.

The Red Devils (2-0) led 3-0 at halftime and got a 49-yard scoring pass from Justice Craig to Zane Redmond in the opening minutes of the second half to extend the lead.

Running back Allen Wilfong ran for a TD and more than 170 yards and Allan Shade added two rushing TDs for the Red Devils, who have 11 wins in their last 15 games against Hickory (0-3).

Newton-Conover and Hickory battled for the 30th time since 1980, and the Red Devils are 19-11 in those games.

Running back Cody Young had nearly 200 rushing yards in the loss for Hickory, which beat Newton-Conover 35-6 a year ago despite Wilfong’s 147 yards rushing.

The Trojans (3-0) remained unbeaten, handing the host Spartans their first loss, after two quick scores in the third quarter opened a 20-point lead.

Bandys led 13-8 at the half and scored on a 12-yard run by Malik Kennedy with 8:17 left in the third quarter, with a two-point conversion run by Isaiah Gilchrist stretching the lead to 21-8.

On the ensuing kickoff, the Spartans’ Isaiah Kirby fumbled at the end of a return and Chris Culliver recovered for Bandys at the South Caldwell 34. Five plays later, Quenten Maddox ran 3 yards for a TD and Jessie Pope’s PAT made it 28-8.

The Trojans led 34-14 when quarterback Parker DeHart intentionally ran out the back of the end zone, giving the Spartans a safety.

With 40.9 seconds to play, South Caldwell running back Spencer Piercy (20 carries for 145 yards) scored on a 12-yard run and caught a two-point conversion pass from Avery Raynor.

The visiting Greyhounds (3-0) scored the final 28 points, erasing a 14-point deficit to beat the Cougars (2-1) in Taylorsville. 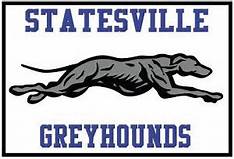 Alexander Central led 35-21 with 4 ½ minutes left in the third quarter after a 2-yard TD run by Dayente Calhoun.

About two minutes later, Chavion Smith scored on a 5-yard run for Statesville. The Greyhounds then tied it at 35 when Jasaiah Gathings scored on a 45-yard pass from Nebanyne Moore and Sam Bucker added a PAT.

With 7:36 to play, Zamari Stevenson’s 79-yard interception return put Statesville ahead and Caylon Imes scored on a 1-yard run about four minutes later.

Moore completed 16 of 21 passes for 237 yards as the Greyhounds overcame 184 yards rushing on 21 carries by the Cougars’ Steven Montgomery.

Gathings had six catches for 135 yards for Statesville.

Colston Yount led Alexander Central with seven tackles and Ibarhim Boston had six, 1 ½ of those for lost yardage.

Alexander Central lost for only the sixth time in its last 27 games.

Quarterback Gabriel Hollingsworth had a hand in five scores to lead host Reagan past the Pioneers (2-1) in Winston-Salem.

Jaiden Bond had two rushing scores for Watauga on five carries for 102 yards and Bryce Satterfield scored on a 44-yard run and had 14 carries for 116 yards.