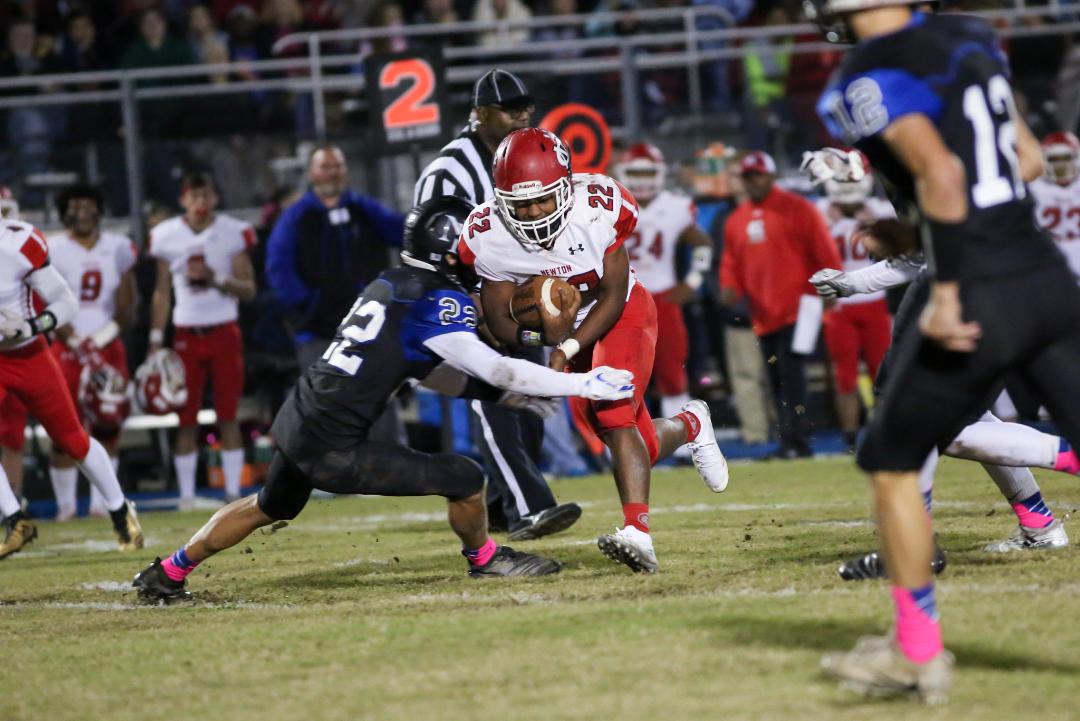 North Lincoln High defensive back Daniel Carter (22) tries to wrap up Newton-Conover running back Allen Wilfong (22) during Friday night’s game at North Lincoln. Wilfong ran for 150 yards but the Knights rolled 47-19 to remain tied for first place with Bandys in South Fork 2A football./PHOTO COURTESY OF OBSERVER NEWS ENTERPRISE

Editor’s note: A story on the Bandys at West Lincoln game — and game summary — are posted separately on the website. 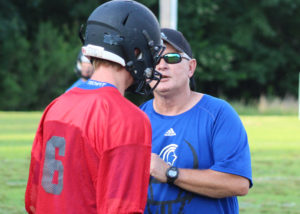 Cribb ran 11 times for 111 yards and Soorus added 105 of 12 carries as North Lincoln head coach Nick Bazzle — head coach at Newton-Conover for 15 years earlier in his career – faced and beat his old school for the first time.

North Lincoln led 19-13 at the half and scored twice in less than two minutes of the third quarter to increase that to 33-13.

Cribb ran 22 yards for a TD with nine minutes, 32 seconds left in the third quarter and quarterback Landon Beard had a 4-yard TD run with 7:49 left in the quarter.

Sam Brady (55 yards) and Soorus (4 yards) has TD runs for North Lincoln after the Red Devils had pulled within 30-19.

“I’m glad it’s over,” Bazzle told The Lincoln Times News after the game. “There were two games on my schedule this year that I was not looking forward to playing and one was Alexander Central because my son is the offensive coordinator there, and then this one.

“So now that these two emotional games – at least we have a split, at least we didn’t go 0’fer – but yeah, I’m just glad it’s over now and move on to the next one.”

Newton-Conover had 370 yards on offense, 150 of it rushing by Allen Wilfong and quarterback Justice Craig threw for 218, completing 16 of 24 passes.

The Knights’ scoring included a 95-yard kickoff return by Jacob Cline that erased the Red Devils’ 7-6 lead in the second quarter.

“Coming into this one, I knew they (Newton-Conover) could strike quick,” Bazzle told The Lincoln Times News. “If you match us up athlete for athlete, we don’t match up with what they have.

“But one thing we do have over here that I’m super proud of is heart. Our kids just play hard and they just don’t quit. They’re going to fight and fight until the end.

North Lincoln — 2-9 last year and with nine straight losing seasons — is contending for its first conference varsity football title. The Knights are three wins away from matching the best record (10-4 in 2007) in school history.

This Friday’s league games include North Lincoln at Lincolnton and Maiden visiting Newton Conover, both kicking off at 7:30 p.m.

DENVER, N.C. — Casey Ly kicked two field goals over the final 7 ½ minutes — his first of the season — as Maiden completed a rally to pull into a three-way tie for fourth place in the South Fork 2A.

Maiden (6-3, 2-3) got within 10-7 when Dylan Abernathy caught a 31-yard scoring pass from Caleb McDaniel, who went under center after Bain Sipe sustained a shoulder injury.

Maiden head coach Will Byrne picked up his 25th career victory (25-8, third season) as the Blue Devils won at East Lincoln for the first time in their last five visits.

Next up for Maiden is a league game Friday at 7:30 p.m. at archrival Newton-Conover.

East Lincoln meets West Lincoln on the road Friday at 7:30 p.m. in a conference game.

East Lincoln, Maiden and Newton-Conover share fourth place, each a game back of third-place West Lincoln.

HUNTERSVILLE – The Wolves held the Knights to 40 yards of offense, and James Woods ran for 113 yards and two scores as Lincolnton moved out of last place in the conference.

Woods had 15 carries and scored on two of them – on runs of 17 and 28 yards – and Caden Wyatt and Bernard Wingate each added a scoring run.

Lincolnton’s win means it will have at least one conference victory, leaving its 1985 team (0-10, 0-5 Big Six 3A) as the only one that didn’t win in conference play in records dating back to 1974.

The Wolves, who snapped a four-game losing streak, plays North Lincoln at Lincolnton on Friday night at 7:30 p.m. in a conference battle.

Lake Norman Charter’s losing streak is at six as it heads to Bandys on Friday night (7:30 p.m. for a conference game).