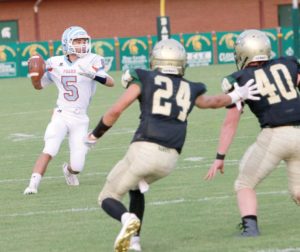 VALDESE – Corey Siemer continued to climb on Fred T. Foard High’s all-time rushing list on Friday night, clearing 2,500 for his career as the visiting Tigers rumbled past Draughn 54-7 in Northwestern Foothills 2A football.

Siemer had 284 rushing yards, scoring three times, and quarterback Jack Colosimo ran for 174 yards and two TDs as Foard (4-5, 3-1) collected 541 rushing yards and moved into a three-way tie for second place with Patton and West Iredell.

Colosimo is in his third season of varsity football, and he cleared 4,000 career yards of total offense on Friday when he also became a 1,000-yard rusher for the season. He has 1,922 career yards rushing and 2,212 career passing yards.

Foard has two conference games to go – Friday at 7:30 p.m. at home against East Burke and Nov. 2 at West Iredell.

Foard is chasing its 15th state playoff appearance. The Tigers finished third in the Northwestern Foothills 2A a year ago and they have not won a conference football title since 1983.

STATESVILLE – Emmanuel Long ran for two scores in the second quarter, when the Warriors scored 23 points, as West Iredell rolled past the visiting Bears.

West Iredell is tied for second place with Fred T. Foard and Patton as it prepares to play at defending league champion Hibriten on Friday night at 7:30 p.m.

Warriors head coach Monte Simmons, 13-30 at West Iredell and in his fourth season, is a former Hibriten assistant coach.

Thomas had a 45-yard scoring run and caught a 59-yard TD pass from Daren Perry in the second quarter and added a 65-yard kickoff return in the fourth quarter to close the game’s scoring.

Hibriten outgained East Burke 415-130 to stay atop the Northwestern Foothills 2A standings. The Panthers won the league last season and went 16-0 to win the state 2AA title.

Hibriten has now won 32 consecutive regular season games as it preps to play West Iredell in Lenoir on Friday at 7:30 p.m. The Panthers need one win to clinch at least a share of the conference title.

East Burke goes to Fred T. Foard on Friday for a 7:30 p.m. kickoff and the Cavs close at home against Draughn on Nov. 2.