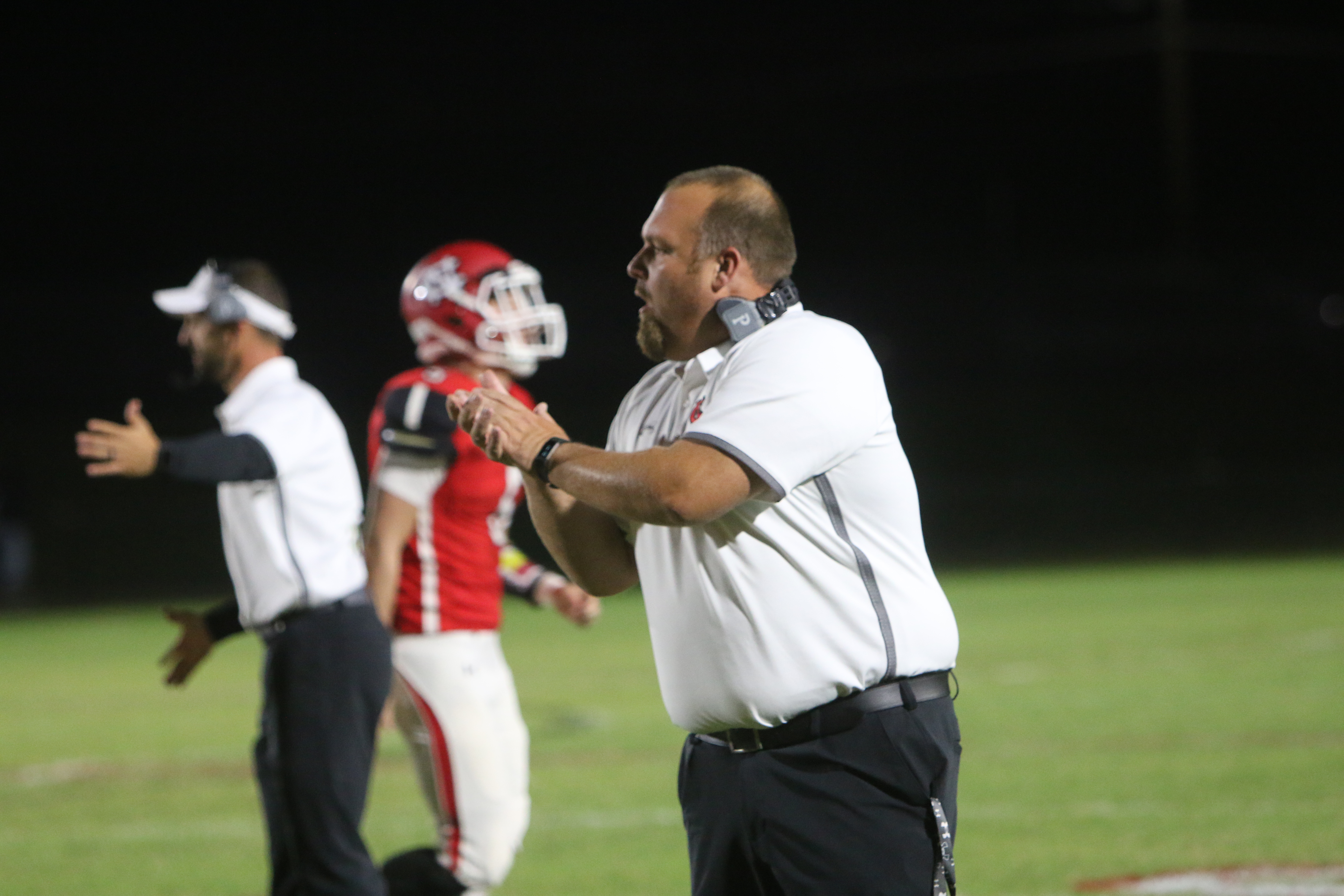 Newton-Conover High head football coach Steven Pack shouts words of encouragement to his Red Devils on Friday night during their 52-28 victory over Lake Norman Charter at Gurley Stadium. The Red Devils are 4-4 overall as they head to North Lincoln for a game on Friday night./PHOTO COURTESY OF OBSERVER NEWS ENTERPRISE.

league-leading Bandys next at West Lincoln

Editor’s note: A story on the other South Fork 2A game – East Lincoln at Bandys – is posted separately. 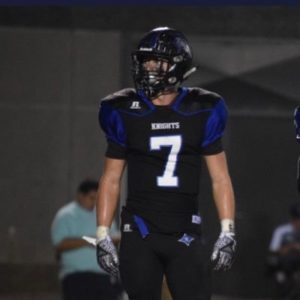 “It’s incredible,” North Lincoln head coach Nick Bazzle told The Observer News Enterprise after the game. “That’s all our kids have been talking about all year – change the culture.

“The only way we can do that is get some wins. And they’ve just bought into what we’ve been teaching them…It’s just a work on everybody’s part.”

The victory kept North Lincoln tied with Bandys (7-1, 4-0), a 35-14 winner on Friday over East Lincoln at Bandys, for first place.

Cribb led North Lincoln’s 248-yard rushing attack against Maiden with his third straight 100-yard game and his fifth with more than 100 this season. He has (unofficially) 443 yards in the last three games.

Maiden led the Knights 13-7 at the half, and North Lincoln grabbed its first lead with five minutes, 21 seconds left in the third quarter on Cribb’s 1-yard run and a PAT by Ian Fiore that capped a 16-play drive.

Maiden closed within two points with 1:11 to go when quarterback Bain Sipe hit wide receiver Dylan Abernathy for a 45-yard TD pass. The Knights stopped a two-point conversion run that would have tied the game.

Bazzle, out of football for two seasons and a previous head coach at Newton-Conover and Alexander Central, picked up his 135th career victory.

“The kids are learning how to win when they’re down (and) when they’re behind,” Bazzle told The Observer News Enterprise. “And if they can do that, the culture will change.

“Sometime down the road our kids won’t say ‘Coach, why do we always get picked for Homecoming?’

“And we’ll say ‘Well, that’s because of where you were. If you want to change that, you’re going to have to change the culture.

“That’s kind if motivation for them too. We’re just playing really good right now but we’re beat up as we can be.

“We’ve got people out that’s not been able to play and that’s hurting but if one goes out the other comes in so I’m just proud of them.”

LINCOLNTON — Running back Nakathan Phansook returned to the offensive lineup for the Rebels, rushing 23 times for 138 yards and two scores as West Lincoln nipped the Wolves in Lincolnton.

Phansook scored on runs of 5 and 2 yards and running back Brendon Ikard had 21 carries for 119 yards and a rushing TD as West Lincoln reached seven wins for the 10th time in school history.

The Rebels’ school record for single-season wins is eight.

Phansook, who played only on defense the week before due to an injury, scored on a 5-yard run in the first quarter and Gerrardo Quintero-Meja’s PAT tied it 7-all.

Lincolnton’s Caden Wyatt scored on a 2-yard run about 7 ½ minutes later and Justin White’s PAT left it at 14-14 at halftime.

Ikard’s 17-yard run with 2:30 to play in the third quarter was the only second-half score.

The Wolves fell to 7-14 in their last 21 games and have matchups with Lake Norman Charter, North Lincoln and Maiden to go.

NEWTON — The Red Devils (4-4, 2-2) rolled at home, piling up 568 yards on offense with running back Allen Wilfong rushing 18 times for a season-high 210 yards and two scores.

Wide receiver Kyjuan McClain had five catches for 85 yards for the Red Devils.

Unofficially, Wilfong is at 1,051 rushing yards this season. He has six games of 100 or more yards rushing.