Editor’s note: An update on the process as Newton-Conover High moves toward naming a head football coach to replace Matt Beam, who resigned May 2.

Here is Christopher’s story, published at HobbsDailyReport.com with permission:

NEWTON — Pending approval from the Newton-Conover City Schools Board of Education on Monday night, Newton-Conover High hopes to have its new head football coach named.

On May 2, Matt Beam resigned from the position of Red Devils head football coach to begin a new business venture with his family. At that time, Darren Ponder was named the interim head coach and expected to be the head coach for the 2018 season.

That all changed by May 5. 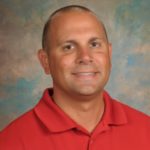 “With Coach Beam’s resignation it caught everyone by shock on Wednesday morning (May 2) and Coach Ponder kind of took the job to rally the troops,” Newton-Conover athletic director John Echerd said. “And then after consulting with his family he just felt like he didn’t have it in him to be a head coach so he resigned from the position there that Friday and then that Monday morning we decided to go ahead and open it up with the process.

“We’ve had some very good candidates apply for this position. We interviewed some great (candidates) and we’re looking forward to advancing Newton-Conover football into the future.”

Echerd could not confirm if Ponder is still on the football staff.

Echerd said the Newton-Conover City Schools’ central office put out a press release on May 5 indicating Ponder had declined the head-coaching position.

The O-N-E never received such email.

“It was opened up from Monday to Thursday of last week,” Echerd said. “We did interviews and we’re hoping to take a name to the board on Monday.”

Now the focus comes Monday when the school hopes to hear approval of a possible new head coach.

“We did have a good number (of applicants),” Echerd said. “We had a fair number and we told ourselves if we didn’t get a good number we would’ve opened it open for longer but we got a good number during that time period. We went forward with the interviews and went on with it.”

Both Newton-Conover and Bandys could have new head football coaches following their respective board approvals.

“It’s obviously a short time frame or window of getting everything ready for this upcoming season but knowing that we have a lot of our coaches intact on staff we feel pretty confident our boys will be ready for play,” Echerd said. “We’re both in similar situations here where it’s not an ideal time to be hiring a coach but we’ve got to do it and we’re doing the best we can with who we’ve got.

“We’re going to make sure to put the best Newton-Conover football team out there to make the community proud. And that’s our goal moving forward.

“We feel like we are going to be a successful team moving forward working with our young men not only wins and losses but molding them into great young men. That’s always a goal at Newton-Conover High School.”

The next new Red Devils head coach will be the fifth since Don Patrick prior to the 1974 season.