Tom Harper has previously been boss at

Lincolnton head football coach Joe Glass welcomed Harper, who has been an assistant football coach at North Iredell since leaving Fred T. Foard as head coach in May of 2016, in a social media post on Wednesday. 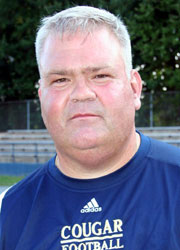 Harper, Glass and Clarke were not immediately available for comment.

A second-generation coach, Harper is from Daniel (S.C.) who then played football at Lees-McRae Junior College and for 2 ½ seasons at Middle Tennessee State. He is a Catawba College graduate who also coached football there.

Harper was an assistant football coach at Freedom whose first head-coaching job was then at East Burke in 1999 (8-24 record in three years replacing Mike Helms).

His next head-coaching job started in 2007 at Alexander Central, where he replaced Chris Deal and stayed five seasons.

Harper’s teams went 34-26 and to the state 4A playoffs four times in Taylorsville, and his 2009 team (11-2) tied the school record for single-season wins. The next year, the Cougars went 9-3 and won their first varsity football title since 1983.

When John Worley retired as head football coach and athletic director t Hickory, Harper took those jobs for the 2012 season. The Red Tornadoes were 8-5 and made the state 3A playoffs under Harper.

After one season at HHS, Harper moved to Fred T. Foard to replace Jason Phelps and he coached three teams there with records of 0-11, 6-6 and 1-10.

The 2014 team, sparked by quarterback Matt Williams (who transferred from Hickory), finished fourth in the Northwestern 3A-4A and made the state 3A playoffs.

He resigned at Foard in the first week of March 2016, and has been an assistant coach at North Iredell since 2017.

Next season will be Glass’ second as head coach at Lincolnton. The Wolves were 3-8 overall last season and 1-6 in the South Fork 2A, finishing seventh in an eight-team league.

Lincolnton is 11-24 in the last three seasons and has missed the state playoffs the last two years after 18 straight bids that include second-place finishes in 2005 and 2011.