He played on first Spartans team, was

head  coach at alma mater for 10-plus years

Editor’s note: All content on HobbsDailyReport.com is copyrighted — including the history of South Caldwell football included in this article – and can’t be published by print media or broadcast without crediting HobbsDailyReportcom’s research or obtaining a copyright waiver. To request a waiver, e-mail chobbs001@att.net. 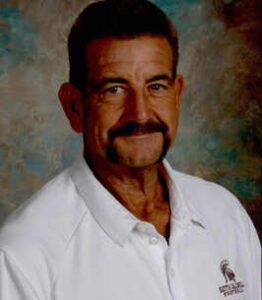 Hardee also served as athletic director at South Caldwell during his tenure there.

After graduating from South Caldwell in 1978 and from Lenoir-Rhyne University (where he played football) in 1982, Hardee spent one season as an assistant coach at South Caldwell before going to Ashe Central at head coach.

He left Ashe Central after three years (5-25 record) to become head coach at West Lincoln, where his three teams were 5-25.

Hardee returned to South Caldwell for the 1990 season and became head coach for the final eight games when John Mackey resigned. The Spartans were 1-7 under Hardee.

With a team led by three players who each accounted for more than 62 points each – Scott Auton (89), Kevin Davis (88) and Gary Crouch (62) – the Spartans started 4-1 before losing at West Caldwell. They then won five straight games – over East Burke, Fred T. Foard, Hickory, St. Stephens and East Lincoln – to win a league title before falling in a first-round state 3A playoff game to North Iredell.

Hardee also coached South Caldwell (5-7) to a state playoff bid in 1997, and the Spartans tied Fred T. Foard for third place in the Western Foothills 3A.

Led by quarterback Preston Austin (62-of-170 passing for 945 yards and nine touchdown passes), the Spartans snapped a three-game losing streak with victories over East Lincoln and Fred T. Foard to get into the postseason. East Rowan then knocked visiting South Caldwell out of the state 3A playoffs in the opening round.

South Caldwell’s record under Hardee was 35-82 and his career coaching record was 45-132.

A burly teen when Hudson High and Granite Falls High merged to form South Caldwell, Hardee was a major force for the Spartans when they went 11-3 under late head coach Don (Red) Kirkpatrick in the school’s first year. That team won a Northwestern 3A title and played for the state 3A championship.

Chris Hobbs, editor and content coordinator of HobbsDailyReport.com, is preparing for his 47th season of covering prep football in the Greater Hickory area. He has covered Spartans football every year since the school opened and before that sports teams at since-closed Hudson and Granite Falls high schools.