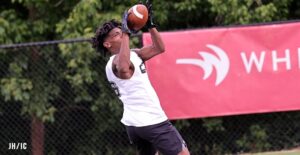 Maiden is 13-0 overall after going 7-0 to win a Catawba Valley 2A Athletic title… The Blue Devils’ next opponent is No. 2 East Surry (12-0), coached by former Bandys star QB Trent Lowman… Lowman and Maiden head coach Will Byrne, a star WR for the Blue Devils, were Shrine Bowl teammates as seniors … Maiden won 31-6 at East Surry in the second round in 2002, and the Blue Devils downed the Cardinals 21-12 in the first round in 2003 at East Surry… In records dating back to 1953, Maiden is in its 46th appearance in the state playoffs with an overall record of 54-43… The Blue Devils are 36-18 at home in the postseason and 17-22 in away games … Maiden has not won a postseason game on the road since beating Polk County in the second round in 2011… Since winning a first-round game at East Surry in 2003, the Blue Devils are 3-11 on the road in the postseason and they have lost five straight away playoff games … Salisbury, last year’s state 2AA champion, finished 11-1 … Last season, the Hornets hammered the Blue Devils 52-12 in a first-round game at Maiden … Two other Maiden teams have reached 13 wins – 14-1 in 1992 and in 2004 … In the last five seasons, Maiden is 47-10 … All six of the previous Maiden teams to get to the fourth round – 1978, 1992, 1993, 1998, 2002 and 2004 – were coached by the late Tom Brown… Maiden last reached the fourth round in 2004, beating Surry Central at Maiden, winning at Hendersonville, beating Starmount in Maiden and falling to Thomasville in Maiden.

— Maiden scored first, on its opening possession. After Rhodes muffed a handoff that resulted in a 7-yard loss, he hit Culliver on a left-to-right slant for 52 yards and a TD.

— Culliver overcame double and triple coverage – or at least having that many defenders within reach of making a play – on three of his four TD catches.

— Gibbs recovered a fumble in the backfield by Rhodes on third down in Maiden’s second possession. On the next play, a fourth-and-4, Culliver outleaped two defenders in the left back corner of the end zone for a two-score lead.

— A 79-yard drive that netted the Blue Devils a 25-7 lead in the third quarter included an across-the-middle reception by Culliver that covered 42 yards. After one running play followed, Culliver hit sure-handed Jacob Sigmon twice and threw 10 yards to Alec Hall for a TD.

— Sigmon had five catches for 88 yards, the first going for 45 yards. In the CVAC 2A this season, only Sigmon, A.J. Cauthen (Newton-Conover) and Parker Stybroski (Bandys) had at least one catch in every game they played.

— Going into Friday’s game, season-highs for Culliver were eight catches (for 98 yards) against Lincolnton and 138 yards on three catches against Bunker Hill. 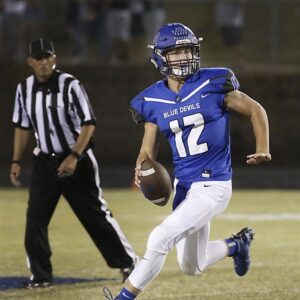 When asked who can cover Culliver: “Not a single guy in the world … He is an incredible athlete and he is always working so hard.

“It (his advantage) is his speed. That’s why he has been working his butt off.

“We have a lot of communication… We just know it is going to go down (that Culliver will get open).

On motivation to play well against Salisbury (he was intercepted five times in last year’s playoff loss): “We played for us and for the seniors who walked off the field with their heads down (after last year’s loss).

“I underperformed (in the spring postseason game). Chris and I (on Friday) were in check. I trusted my line and had time to get the ball out.

“When a dude (defender) is less than (from Culliver), I know he (Culliver) is going to be gone.”

On playing East Surry: “I think they are gonna have to figure out some ways to stop us. We’ve been really good.”

On Culliver-Rhodes connection: “(Culliver) and Ethan were on tonight. That was the game play… we were going to throw short stuff, try to keep the defenders off us and then we took our shots.”

When he knows it is time to take a shot with Culliver going deep: “Tonight, I just saw the eyes of the corner. Saw fear in their eyes. Gotta get him (Culliver) the ball quick.

“They did not wanna get beat deep. They were playing on their heels… and it was time to go after him.

“It was definitely impressive. We knew we were going to throw to him. I am not shocked (by 11 catches). He’s an incredible athlete. He tracks the ball so well and goes and gets it.

“He has that extra gear. He can turn it on and that’s what makes him a great receiver.

“He is starting to get it. He has more confidence in his sets. He’s just so explosive and strong.”