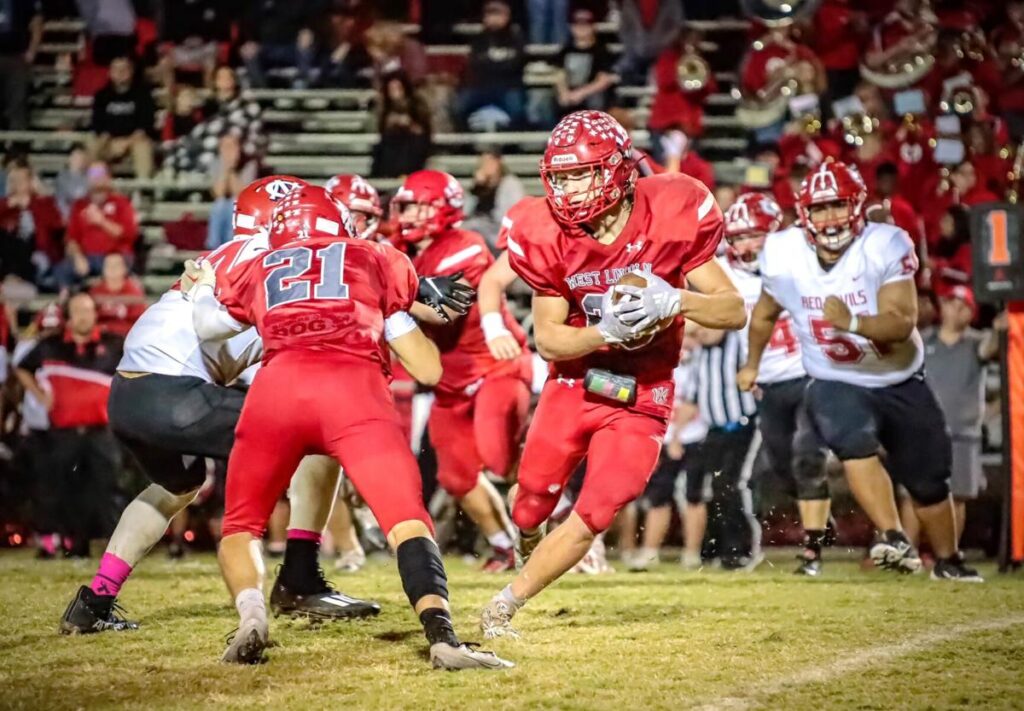 West Lincoln running back Mason Avery (with ball), who also plays defense for the Rebels, sparkled with record-setting single game and season rushing records this season and is recognized in All-Catawba Valley 2A Athletic selections as co-Offensive Player of the Year with Maiden wide receiver Chris Culliver and Avery is also the league pick as Defensive Player of the Year./LINCOLN TIMES NEWS PHOTO

Dominating seasons – another title for Maiden and big year from its star wide receiver plus a record-setting year for West Lincoln’s top running back – led to two of the key 2022 Catawba Valley 2A Athletic high school football awards being shared.

The league’s eight head coaches selected All-CVAC 2A based on a conference-set formula of nine picks to the championship team all the way down to two picks for the last-place team.

Coaches selected Maiden senior wide receiver Chris Culliver and West Lincoln senior running back Mason Avery as co-Offensive Players of the Year. Both have been selected to play for North Carolina in the Shrine Bowl in Spartanburg, S.C.

Avery won Defensive Player of the Year while Maiden’s Will Byrne was named Coach of the Year.

Maiden finished 7-0 in the conference – its third straight unbeaten league record (the first was in the South Fork 2A) – and 12-2 overall. That left Bryne’s record at 67-17 after seven seasons as head coach at his alma mater. 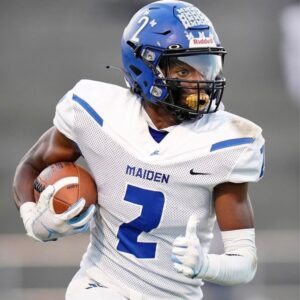 Maiden senior wide receiver Chris Culliver shares All-CVAC 2A Offensive Player of the Year and also shares Specialist of the Year after a sterling senior season. He had 80 catches for 1,809 yards and 26 TDs./HUDL PHOTO

Avery had a county-record 397 yards and three scores in a victory over Newton-Conover and his rushing total and TDs totals also set Lincoln County records.

Soto helped second-place Bunker Hill go 11-2 overall and 6-1 in the CVAC by hitting 44 of 53 extra points and six of 10 field goal attempts.

The coaches picked 44 players and 13 of them were also All-CVAC 2A last season – Culliver, Gibbs and D.J. Spring, Alec Hall and Jacob Sigmon of Maiden, Elijah Boston of Bunker Hill, Avery and Curtis Goins of West Lincoln, Easton Dellinger, Khamoni Heath and Andre Bost of Lincolnton, Ben Watson of Newton-Conover and Luke Wilson of East Burke.

Coach of the Year: Will Bryne, Maiden