Watauga High freshman guard Kate Sears has been selected second-team all-state by the North Carolina Basketball Coaches Association (NCBCA), and she is the only player from Greater Hickory area conferences to make all-state. 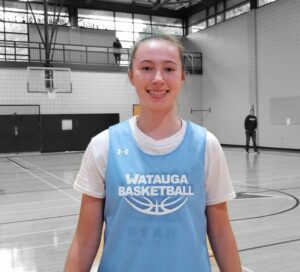 Watauga shared the Northwestern 3A-4A regular-season title with Alexander Central – they each were 8-2 – and the Pioneers won the conference tournament title by beating the Cougars 39-28.

The Pioneers started the season 7-0 and were then beaten by Asheville Roberson in overtime. Watauga then won 10 straight games before an upset loss to Hibriten and a loss at Alexander Central.

After winning the conference tournament, the Pioneers beat Garinger and Winston-Salem Reagan in the state 4A playoffs. Lake Norman eliminated Watauga in the third round, winning 55-44 in Boone.