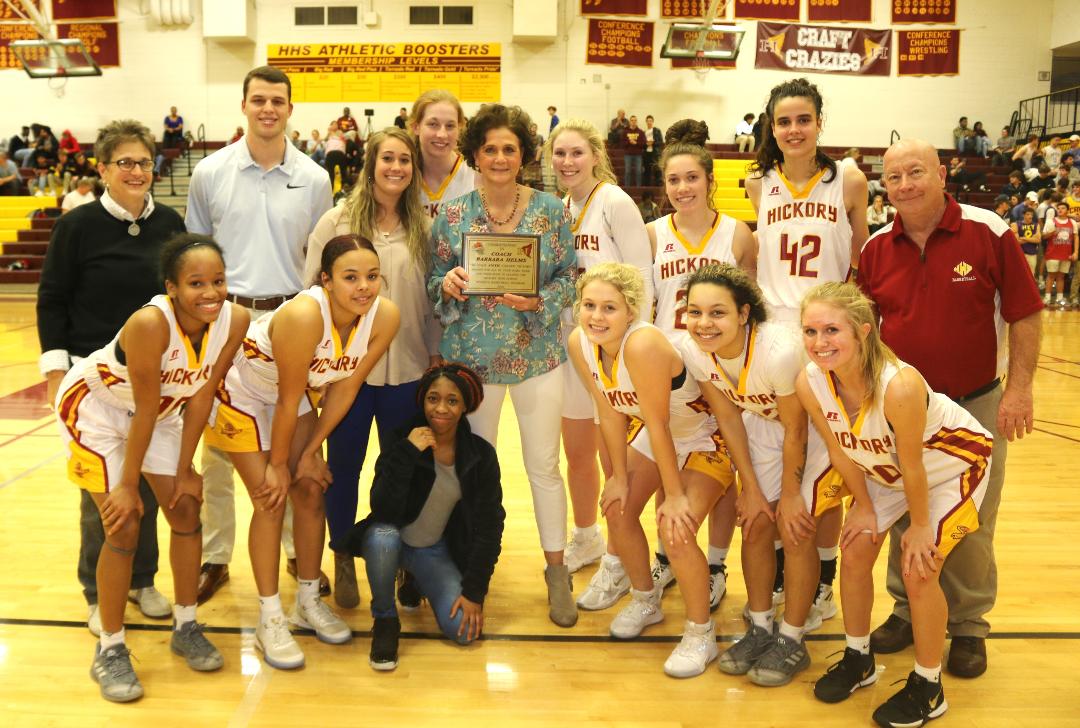 Hickory High varsity girls basketball head coach Barbara Helms with her team and a plaque presented to her after the Red Tornadoes beat visiting Alexander Central on Tuesday night. The school and school system have indicated Helms has 450 career wins while coaching at East Burke and HHS. Game-by-game research of Helms’ 20 years as a head coach give her 449 career wins./HICKORY PUBLIC SCHOOLS PHOTO

at East Burke and with Red Tornadoes

Editor’s note: Information in this story, including research on Barbara Helms’ records, is copyrighted and can’t be reproduced in print, via broadcast or any other means without a direct waiver of the copyright by HobbsDailyReport.com. To request that waiver, email chobbs001@att.net.

In the press release, Helms is credited with a 450th career victory via Hickory’s 60-52 home win over Alexander Central in a Northwestern 3A-4A game on Tuesday night. 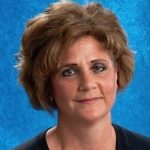 The press release included a photo following the Alexander Central game that included the HHS team with Helms as she received a plaque commemorating a milestone victory.

Extensive research by HobbsDailyReport.com completed on Jan. 28 – including reviewing every game Helms is known to have been head coach in at first East Burke and then HHS – had her career record at 446-105 (38-37 at East Burke, 408-68 at HHS).

Freedom defeated HHS on Jan. 28, dropping Helms’ career mark to 446-106, and the Red Tornadoes have since posted these wins:

— On Tuesday night, 60-52 over Alexander Central in Hickory.

Hickory (17-5, 8-3) is idle until Friday when it closes the regular season at home against St. Stephens, the school Helms has the most career wins against (44).

An email response on Wednesday night from HPS’ communications department said the school and school system are going with the Alexander Central victory as No. 450 in Helms’ career.

The North Carolina High School Athletic Association (NCHSAA) recognizes coaching records and other student-athlete accomplishments as those a school submits (or will submit) for the NCHSAA Record Book or an NCHSAA listing.

An NCHSAA staffer said Thursday the NCHSAA might ask for a year-by-year record breakdown that equals the number of wins a coach has but does not require it with a submission.

Statistics in all high school sports via media reports are considered unofficial; i.e, in football if a school submits a career rushing total of a player as 5,222 and media-kept totals reflect 5,177, the recognized career total for the player is 5,222 even if the school can’t provide game-by-game totals and a media outlet can document its total.

HobbsDailyReport.com reviewed Helms’ coaching records after the website was asked by the HHS athletic department if it had any information documenting Helms’ basketball coaching career.

The website has reached out to HPS officials, the HHS athletic department and Helms to try to clarify if its game-by-game results are complete or missing any games.