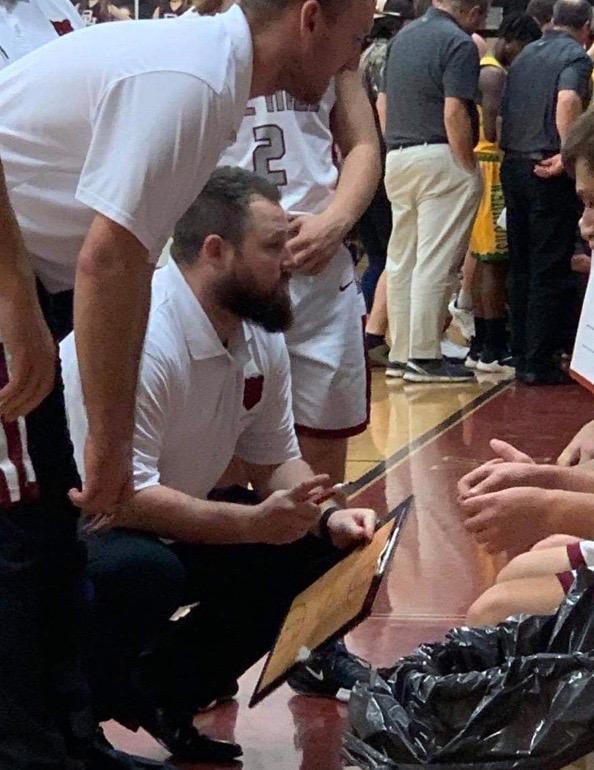 After one season as an assistant coach for the varsity boys’ basketball team, Anthony Church (left with clipboard) has been promoted to head coach at Bunker Hill High. He’s a Lenoir-Rhyne University graduate who played prep sports at West Wilkes./BUNKER HILL HIGH PHOTO

Johnson left the Bears after one season (they went 3-22 overall, 1-13 in the Northwestern Foothills 2A) to become an assistant principal at North Buncombe.

Church will teach physical education at Bunker Hill, where he is the seventh varsity boys’ basketball head coach since 1979-80.

“I am truly blessed and honored to have this opportunity to become the head men’s basketball coach at Bunker Hill High School,” Church said in a press release. “I intend to develop a basketball program that our players, staff, alumni, and community will be proud of.

“We have a great group of young men at Bunker Hill, and I am extremely excited to get to work towards success not only on the court, but also off the court.”

Church has coordinated all basketball workouts at Bunker Hill since Johnson left.

“When we hired Coach Johnson, we knew about his desire to become an administrator, and we supported him in making that move,” Bunker Hill athletic director James Byrd said in the press release. “We are very fortunate that Coach Church came on board as Johnson’s assistant because Coach Church managed all of the summer workouts for the team.  He’s definitely not afraid to put in the work.”

A well-rounded high school athlete at West Wilkes, Church graduated from Lenoir-Rhyne University in 2015.  While at LRU, he began his coaching career by assisting with the Hickory Elite, now the Hickory Hoyas.

Church has also taught and coached basketball and a variety of sports while teaching PE at West Wilkes Middle School.  He moved into coaching high school last season at Bunker Hill.

“We are glad to have him,” Bunker Hill Principal Lee Miller, a former Bears athlete and coach, said in the press release. “He’s a good fit for the Bunker Hill athletics program.  He knows the players and the staff, and he’s worked to establish those relationships.

“I’m looking forward to seeing what he can build.”