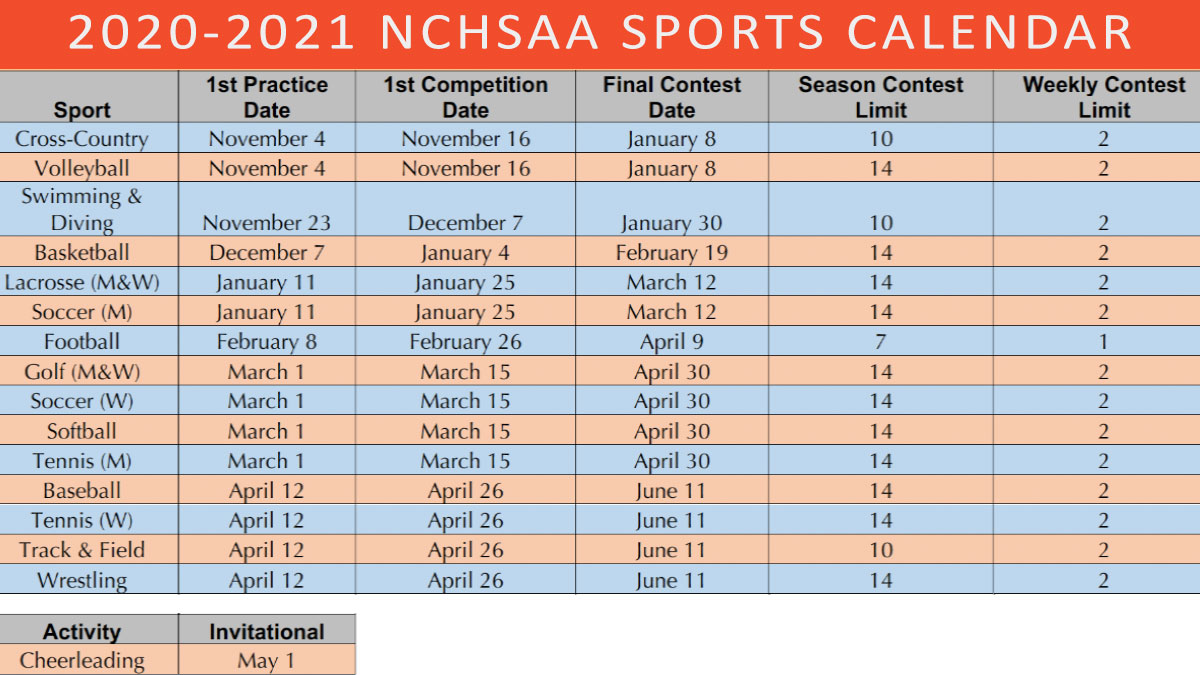 Football limited to 7 games, most other sports

will be able to schedule up to 14 games

CHAPEL HILL — High school football will be moved to February, the North Carolina High School Athletic Association (NCHSAA) announced on Wednesday when it released a proposed athletic calendar for the 2020-2021 school year.

The NCHSAA Board of Directors approved the new calendar in a vote on Tuesday night.

The changes are in response to COVID-19 decisions by Gov. Roy Cooper, after he recently announced Phase Two steps and when and how schools would reopen. That extended the phase, originally scheduled to end, through at least Sept. 11.

Schools will reopen Monday in the Greater Hickory area — all of them choosing to use Plan B (two days in school, three days of virtual learning) — and the first date for sports practices was at that time set for Sept. 1.

In the proposed sports schedule, football would begin practice on Feb. 8, 2021, the first games would be Feb. 26 and a regular season of seven games (one per week) would make the final one on April 9.

A chart released by the NCHSAA did not address state playoffs in any sport.

Volleyball and cross country would open practices first (Nov. 4), swimming and diving would begin practices on Nov. 23, girls’ and boys’ basketball would start practices on Dec. 7 and play first games on Jan. 4 (14 games, two per week) and through Feb. 19.

Boys’ soccer and girls’ and boys’ lacrosse would start with practices on Jan. 11, then play on Jan. 25, with a 14-match schedule.

Golf, tennis, girls’ soccer and softball would first workout on March 1 and play first games on March 15. All would be allowed to play 14 games.