GASTONIA — Zach Jarrett is hitting .215 with five home runs after 30 games with the Gastonia Honey  Hunters, who play in the Atlantic League Professional South Division. 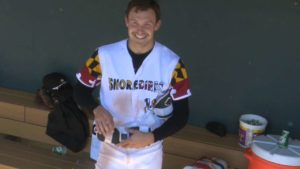 Jarrett, a power-hitting star at Hickory High and Charlotte, joined the Honey Hunters after he was released by the Baltimore Orioles when they broke spring training.

At Gastonia, he also has two doubles, a triple and has driven in 14 runs while starting in the outfield,  primarily in right.

Gastonia plays at Sims Park and has a home game Thursday night against Long Island and a home series June 10-12 against High Point.

The other teams in the Honey Hunters’ division are the High Point Rockers, Charleston Dirty Birds, Lexington Legends and the Kentucky Wild Health Genomes.

He played 91 games in Triple A and was also in spring training with the Orioles several times during his career.