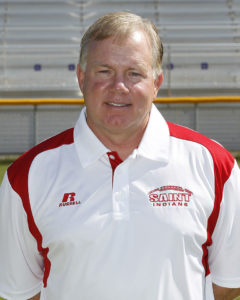 Hicks came to St. Stephens in 2013 from an assistant coaching position at Hickory, where he went after having been head football coach at Lenoir-Rhyne University.

Before his stint at LRU, Hicks coached college football at Elon and North Carolina A&T.

The Indians dipped to 3-8 in 2016 and the next year they were 5-6, which included 4-3 in the league and tying for third place in the best finish for St. Stephens in conference play since a third-place tie in the Southwestern Foothills 3A under John Jarman in 2001.

St. Stephens has earned 10 postseason bids in school history – the 2015 trip is the most recent – and last won a conference title in 1961.

“We … are grateful for Coach Hicks’ years of service,” Baker said in the press release. “He was always a professional and always had our young men prepared.

“Coach Hicks is a man of strong character and integrity and represented St. Stephens well. He does not intend to retire from teaching at this time and we wish him all the best as he moves into life without the rigors of being a head football coach.”

Baker said the school will soon begin accepting applications for the open position and officials hope to make a decision that best suits the needs of the football program.

St. Stephens will change head coaches for the 13th time since 1971 and Hicks’ eight seasons in that stretch are second only to nine years by Dick Foster from 1987 through 1995,

HobbsDailyReport.com will update this story as it develops…