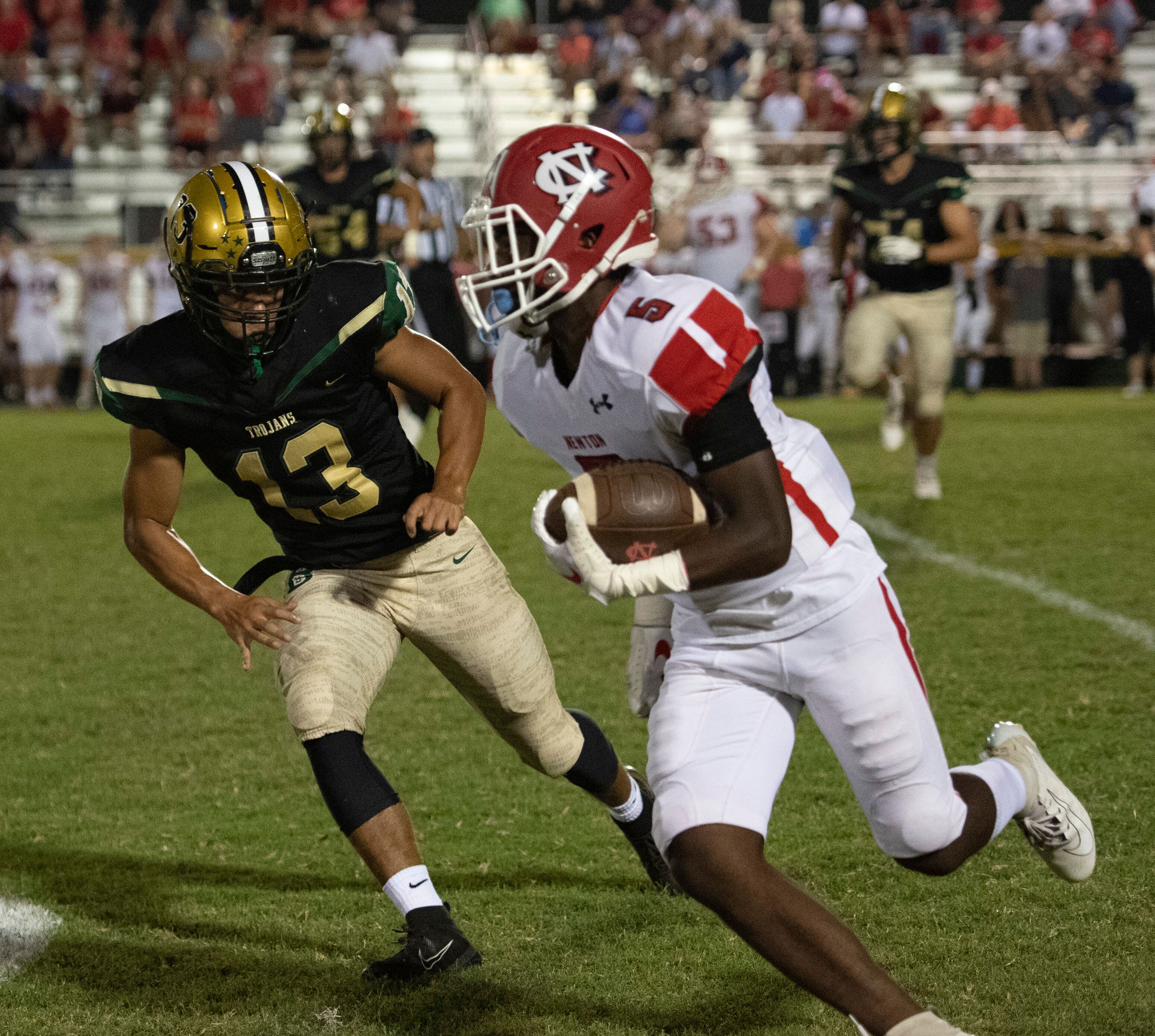 Dylan Jones of Bandys pursues Newton-Conover’s Keagan Covington in Friday night’s South Fork 2A game at Bandys’ Butler Stadium. The Red Devils won 36-13, breaking away from the Trojans with a big second half./MICHELLE THOMPSON PHOTO (purchase her photos by contacting her at luvinlkn@gmail.com).

Bridges gained 203 yards on 23 carries and had nine tackles and a sack as the Rebels nipped visiting Maiden 28-27, beating the Blue Devils for only the fourth time since 1980 and second time at West Lincoln.

The South Fork 2A win was West Lincoln’s first at home over Maiden since an 8-6 decision there in 1985.

The Rebels’ Hunter Leonhardt answered that, taking the ensuing kickoff 85 yards for a TD.

Maiden tied it at 14 on Hayden Wright’s 4-yard run.

In the third quarter, Maiden quarterback Ethan Rhodes scored on a 2-yard run and the Blue Devils led 21-14.

Xander Pendergrass’ 90-yard kickoff return helped tie it at 21 before Maiden scored on a 67-yard TD by Amarion Craig. The Blue Devils missed the PAT and led 27-21.

Huitt hit Beam with the game-winner with about eight minutes to go.

Late in the game, Maiden had the ball at its 1 but the Rebels forced a punt.

West Lincoln drove to the Maiden 1 in the dying seconds and took a knee there to run out the clock.

Huitt threw for 86 yards and added six tackles and an interception while Leonhardt added seven tackles for West Lincoln. 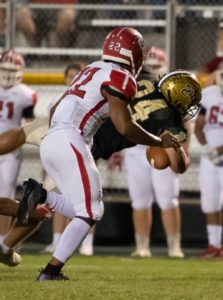 The game was scoreless through one quarter at Butler Stadium and Newton-Conover led 8-6 at the half.

Parker DeHart’s 2-yard run provided Bandys its points in the first half.

Running back Allen Wilfong broke the game open with two scoring runs and Sakarri Morrison’s fumble return TD and a scoring run by Allan Shade had Newton-Conover in control.

Wilfong ran for 140 yards on 22 carries and quarterback Justice Craig went 10 of 15 for 166 yards with three TD passes.

Chris Culliver ran for 47 yards on four carries and Isaiah Gilchrist ran for 34 yards to pace Bandys, which completed just one pass.

The victory was the third straight at Butler Stadium for the Red Devils, who have also won 14 of their 20 games there since 1980.

Bandys fell to 15-5 under head coach Tom Eanes, who guided the Trojans to a South Fork 2A title last season.

The Mustangs (6-0, 2-0) rallied in the second half to win at home and continue to share the South Fork 2A lead.

East Lincoln drove for a potential score late but lost possession on a turnover.

The Mustangs’ defense then forced a punt after three plays and blocked it to get the ball back in Wolves territory.

Running back Cole Barber scored on a 17-yard run and the PAT put the Mustangs up 10-7.

After the teams exchanged turnovers, East Lincoln forced Lincolnton to punt and held the Wolves scoreless over the final four minutes.

“That was a great effort, and we knew coming into the season that we’d be pretty dang good on that side of the ball, but they’ve really just blown our expectations out of the water.”

There were five turnovers in the opening half.

Lincolnton’s score was a short TD pass from quarterback Reed King to Dejarris Gash. King left the game with an injury and Amontre Finger moved from running back to quarterback for Lincolnton.

Sophomore running back Ty Williams ran for 146 yards on 14 carries and scored four TDs as North Lincoln (5-1, 2-0) cruised to a victory on the road.

North Lincoln ran for 360 yards while its defense had five sacks.

Harley Porter had the third interception by North Lincoln.