a junior but will play TE for Spartans

HUDSON – Nick Everhart, who would have been the second-leading returning passer in the Western Foothills 3A after averaging nearly 100 yards per game for Hickory High last season, will now be playing at South Caldwell.

Everhart was a student-athlete at South Caldwell as a freshman and spent his sophomore and junior seasons at Hickory. 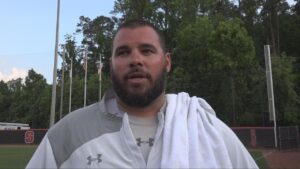 South Caldwell’s new head coach, Casey Justice, said Everhart is working out at tight end for the Spartans. Returnees Will Connor (7-9-1 for 59 yards) and Joe Bolick (3-5-0, 20 yards) will battle for the Spartans’ starting quarterback spot.

Last season, when Hickory (0-7) went winless, Everhart unofficially threw for 696 yards (99.4 yards per game) by completing 55 of 126 passes with five touchdowns and five interceptions. He added 44 rushes for 53 yards and two scores.

Everhart’s move makes him the leading returner passer in the new conference, well ahead of Watauga’s Carlton Horine (67.2 yards per game).

The league graduated many of its starting quarterbacks.

Connor is third among the returning quarterbacks in the new conference.

Justice, a former starting quarterback at South Caldwell, debuts as head coach on Aug. 20 with a home game against West Caldwell.