The Crawdads at Intimidators game was rained out on Friday and will now be played as part of a Sunday doubleheader in Kannapolis after a regularly scheduled game begins that day at 2:35 p.m. 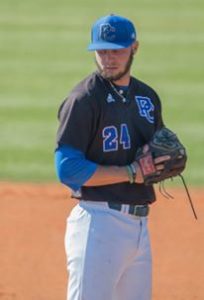 Former Bandys High star Hayden Deal, a left-handed relief pitcher for the Braves (25-15), gained his third victory of the season (3-0) on Friday night when they downed visiting Asheville 6-5.

Deal pitched the seventh, eighth and ninth innings in relief of Jacob Belinda. He allowed three hits, two runs (both earned) with one walk and four strikeouts in front of a crowd of 3,128.

Deal has pitched 16 1/3 innings over eight games this season, allowing 13 hits, four runs (all earned) with three walks and 25 strikeouts. His ERA is 2.20.

In his last three outings, Deal has gone nine innings and given up four hits while walking one and striking out 18 with an ERA of 2.00.

Former Bandys High star Hunter Harvey did not pitch on Friday night when Bowie fell 2-0 at Trenton (N.J.) before a crowd of 6,174.

Harvey last started on Tuesday night in a game that was eventually suspended after six innings tied at 4. On Wednesday, Bowie won the suspended game 5-4 and then fell 5-2 in a regularly scheduled game.

Harvey’s start was his sixth start of the season. He pitched four innings, giving up four hits, three runs (all earned), walking two and striking out five as his ERA went up to 4.22. He faced 17 batters and threw strikes on 36 of his 59 pitches.

Zach Jarrett is a former Hickory High and Charlotte star playing for the Shorebirds (25-13), whose home game on Friday night against Hagerstown (Md.) was rained out.

After Delmarva finishes its series with the Suns – a game Saturday at 7:05 p.m., a game on Sunday at 2:35 p.m., followed by Friday night’s makeup game — it comes to Hickory to play four games at L.P. Frans Stadium next week.

On Tuesday night, in an 8-6 win in 10 innings at Columbia, S.C., Jarrett started in right field and hit No. 3 in the order. He went 0-for-4 with one walk and two strikeouts.

His batting average dipped to .291 in 35 games with seven home runs and 17 RBIs and is tied for 18th among South Atlantic League hitters.

Jarrett is hitting .256 in his last 10 games with no home runs, three walks and two RBIs.

His seven home runs tie him for fourth in the league with Brett Boswell of Asheville, Seamus Curran of Delmarva and Ramon Marcelino of Asheville.