AUBURN, Ala. – Hickory golfer J.T. Poston has made another cut, his 17th in 25 events as a PGA Tour rookie.

Poston shot a 68 on Thursday and a second-round 72 at the Barbasol Championship on Friday. His 2-under par 140, which 15 other golfers shot, advanced him to the third round on Saturday. 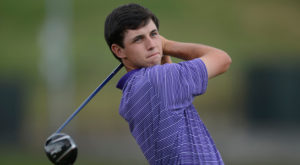 A day earlier, he birdied three holes and bogeyed two in the first round.

Poston, who played golf at Hickory High and then Western Carolina, is tied for 68th with three other golfers – Texans Martin Flores (Forth Worth) and Kelly Kraft (Denton) and South Korea’s Y.E. Yang.

Poston, whose earnings topped $600,000 in last week’s John Deere Classic, is not listed in the field for the World Golf Championships in Akron, Ohio on Aug. 3-6.

He also is not yet shown on the entry list for the field on Aug. 3-6 at the Barracuda Championships in Las Vegas.