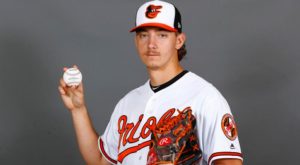 Harvey, a former Bandys High star, was picked off the waiver wire by the Washington Nationals earlier in the week. He was on the wire after being removed from the 40-man roster of the San Francisco Giants.

He is on the Nationals’ 40-man roster and wearing No. 73. They are expected to bring him along slowly and anticipate him being a reliever if he makes the big league roster.

A first-round draft pick by the Baltimore Orioles, Harvey has battled injuries to get to the major leagues. He made 23 appearances with Baltimore, which placed him on waivers after last season ended.

The Giants claimed Harvey and he went to Arizona for spring training.