He joins Orioles in Boston, awaits making debut in the big leagues 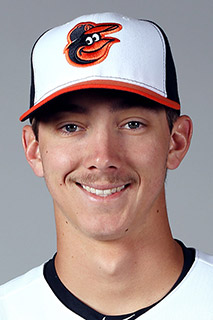 The Baltimore Orioles, who took Harvey with a first-round pick in the draft in 2013, announced Saturday they are moving him from Triple-A Norfolk (Va.) to the big league roster.

This is Harvey’s second time on the major league roster. He was with the Orioles for two games in 2018 but did not pitch in his previous call up.

After being a starter since being drafted, Harvey moved into a relief pitching role at Norfolk.

Baltimore has two games left in a series at Boston – playing Saturday at 7:10 p.m. and Sunday at 1:05 p.m. — then goes home for a three-game series against Kansas City that begins Monday night. Tampa Bay follows that with a four-game series at Camden Yards that begins on Thursday night.

He’s the son of former major league closer Bryan Harvey, whose major league debut for the then-California Angels was on May16, 1987 in Anaheim, Calif., against the Orioles. He pitched in his final major league game (for the Florida Marlins) in 1995 and had 177 career saves.

HUNTER TO THE BIGS: https://www.baltimoresun.com/sports/orioles/bs-sp-orioles-hunter-harvey-20190817-a7j3cyvnz5f7heolh6k7zbzd4i-story.html