DENVER, N.C. — Today is a big day around the Hobbs household.

Myra and I would like to invite you to join us as we celebrate the fifth birthday of HobbsDailyReport.com.

Our website became live on April 11, 2017 after I was a “reduction in force” after nearly 20 years as sports editor of The Hickory Daily Record.

When I went to purchase medical insurance shortly after being kicked to the curb, per say, I was asked what I was going to now do? I told Dwayne Wilson that I really did not know.

Wilson recommended starting a website as a way to continue what  I had done — cover local sports, heavily focused on high schools — for nearly 42 years. He encouraged me to consider it and made a standing offer to support that venture, telling me when the website was up and ready to go he would be its first advertiser.

True to his word, Dwayne was our first sponsor… and we have since gained support from Burke Mortuary (Maiden and Newton), The Athletes Lab in Maiden and Bennett’s Funeral Home in Newton and Conover. 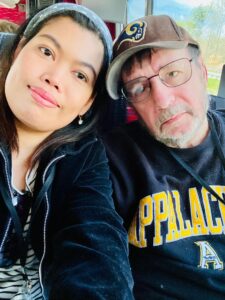 The support provided by Michael Burke (Burke Mortuary), former Maiden High star athlete Grant Rembert (The Lab) and Robbie Bennett (Bennett’s) allow Myra and I to provide our content — now more than 7,000 posts — for sports fans to read for free.

We also thank Dave Lingafelt at WNNC and Lanny Fprd at WLON for being a part of what we do, as HobbsDailyReport.com provides local sports news for both popular radio stations and works closely with both on the coverage of high school football.

The website is a work of love and a way for Chris to continue a career that now spans reporting in six different decades (70s, 80s, 90s, 00s, 10s, 20s). Now 63, he is the longest-serving active sportswriter (on any beat/assignment) in the state of North Carolina at 46 years.

He generally works on the website on a daily basis — seven days a week — via working relationships with the 23 high schools in the Catawba Valley 2A Athletic, Western Foothills 3A, the Northwestern 3A-4A plus Burke County schools Draughn and Patton.

We also follow the Hickory Crawdads, players from local high schools who are playing minor league or major league baseball, and other sports news as it develops.

Our scope is as broad as possible with a working staff of two people — Chris is the website’s editor and content coordinator and Myra takes photos and videos when her work schedule allows.

We would have not survived five years without contributions from literally hundreds of coaches and athletic directors, from true high school sports fans in the region, and from fellow journalists like Jason Baker (Valdese Sports Network), David Keever (Lincolnton Times-News), photographer Michelle Thompson and others.

The love of high school sports runs deep for Chris and also for so many fans who have become loyal readers of HobbsDailyReport.com.

The website is dedicated to the memory of Chris’ two brothers — David and Randy — who both passed away in a span of 13 months in 2019-2020. It is also the result of the love of sports that Chris developed from watching Atlanta Braves and Green Bay Packers games with his grandpa, the late Cecil E. Hamilton (RIP, Pop).

Again, we just want to say “thank you” to those who have found HobbsDailyReport.com to be a useful part of their day and ask that you continue to do so.

We’re moving forward with our eye on at least another four years of work — Chris’ goal is to reach 50 years of coverage before taking a look at whether that’s enough and time to fade away.

We send our prayers to those who need them and best wishes to anyone who loves sports in the Greater Hickory area and frequents our website.