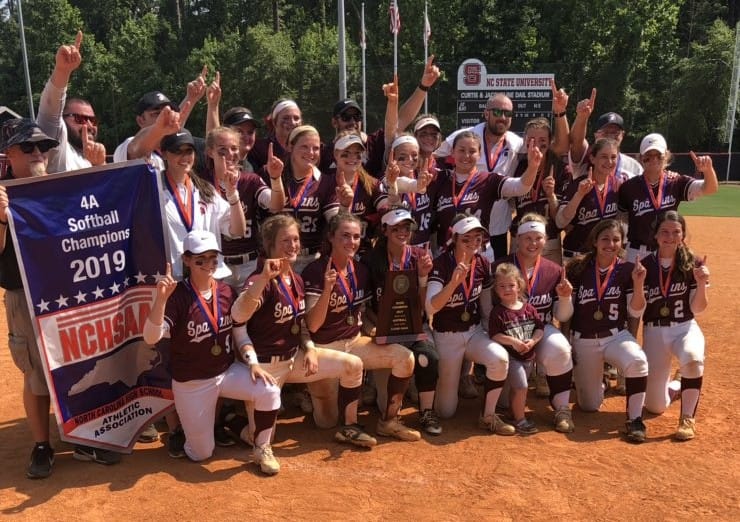 RALEIGH – South Caldwell High’s ride home from the state 4A softball title series was much sweeter this time around.

The Spartans — state runners-up a year ago — won the title this season on Sunday by rallying to force extra innings and beat Wilmington Hoggard 7-5 in eight innings at N.C. State.

The victory closed a 25-5 season for head coach Casey Justice’s Spartans, who won back-to-back games after falling 3-2 in eight innings in Game 1. That game started on Friday and finished on Saturday because of rain on Friday, and the Spartans stayed alive with a 3-2 victory on Saturday.

On Sunday, in a 1 p.m. start at Dial Stadium, South Caldwell kept plugging along until it had what it came to Raleigh for.

It’s the first softball state title for the Spartans, who also won the West 4A title a year ago before falling two games to one to Fayetteville Britt.

A one-out single center field by Ciara Hanson drove in two runs in the eighth inning to give the Spartans a state title.

Regan Weisner went 2-for-4 with three RBIs and was named MVP for the fifth-seeded Spartans.

Jasmine Hall drew a bases-loaded walk in the fourth inning, with two outs, for a 3-1 lead.

Hoggard scored four runs in the fourth inning to lead 5-3. Jesse Mathis opened with a double to left, Skyler Walker was hit by a pitch and Isabell Colbert’s single loaded the bases. Royal drew an RBI walk before a walk to Kira Soodek scored a run and Icess Tresvik’s two-run single but the Vikings in front 5-3.

South Caldwell closed within a run in the fifth inning when an error scored Katie Wright, and Wesiner’s triple that scored Jenna Pittman tied it 5-all.