In voting by the league’s eight head coaches, the Blue Devils led with nine picks that include junior Ben Gibbs as Offensive Player of the Year and junior Chris Culliver as Specialist of the Year. 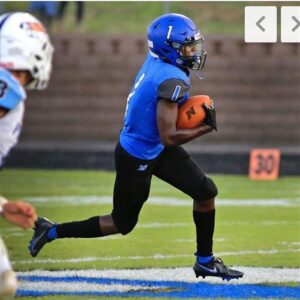 Maiden’s Ben Gibbs, selected Offensive Player of the Year in the Catawba Valley 2A Athletic Conference, had 100 or more yards in each of his last eight games as a junior./HUDL PHOTO 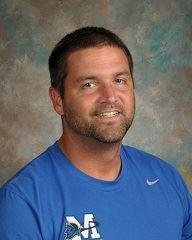 Maiden’s Will Byrne, 55-15 in six years as head coach at his alma mater, was voted Coach of the Year.

Senior Bernard Wingate of Lincolnton was tabbed Defensive Player of the Year.

Maiden went unbeaten in the CVAC 2A this season and finished 13-1, falling 36-35 at East Surry last Friday night in the fourth round of the state 2A playoffs. 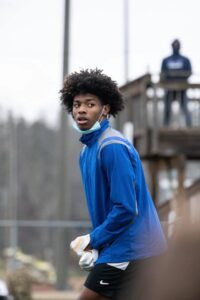 Maiden’s Chris Culliver had nearly 1,200 yards receiving this season and was named the Catawba Valley 2A Athletic Conference’s Specialist of the Year. He made 21 touchdown receptions./FACEBOOK PHOTO

Gibbs ran for more than 100 yards in 11 games, including the Blue Devils’ last eight, and his biggest game was 29 rushes for 215 yards against Newton-Conover.

Culliver (6-3, 180) had 21 receiving TDs, ran for three scores and added a punt return and kickoff return for scores. He unofficially ran 10 times for 112 yards and had 60 catches for 1,167 yards, highlighted by 11 catches for 205 yards and four TDs in a third-round playoff victory over Salisbury. He had six games with 100 or more receiving yards and caught at least one pass in 12 games.

There were 43 players selected for all-conference, including eight for Bunker Hill, six each for Lincolnton and West Lincoln and five at Newton-Conover.