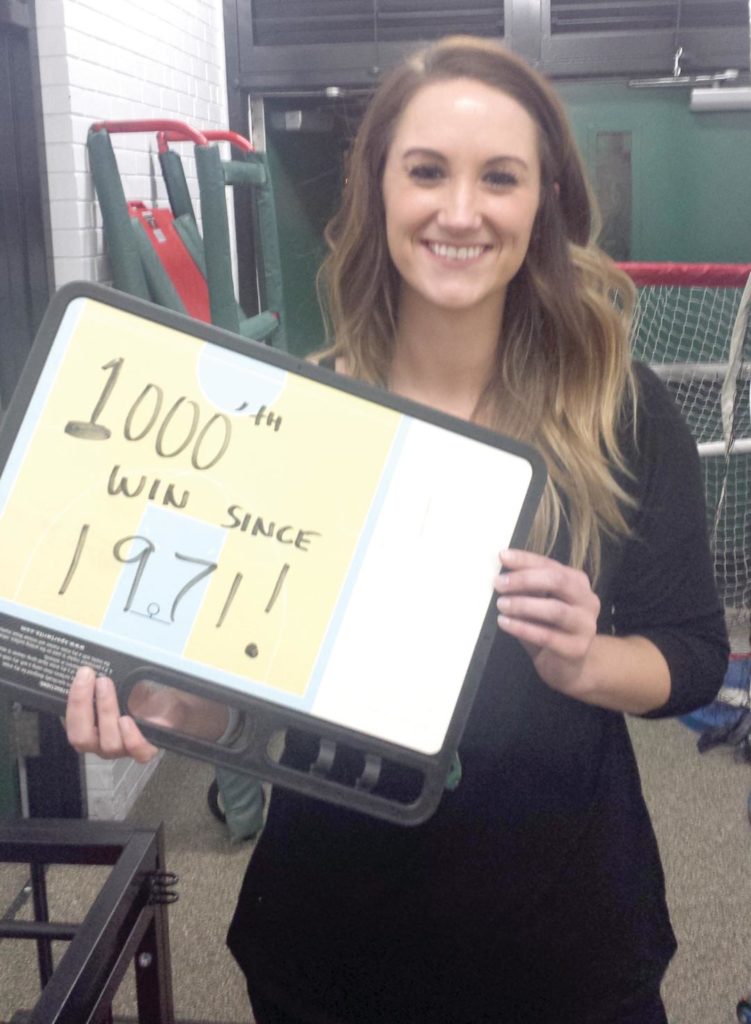 Nicki (Sigmon) Brittain, who resigned Thursday after five seasons as head girls’ varsity basketball coach at Bandys High (her alma mater), was the head coach when the Trojans gained their 1,00th victory since the 1970-71 season. She added 68 wins to that total in her tenure and is only the second former Bandys girls’ player to then become head coach of the varsity girls at her school. She will continue to reach at the school, she said./BANDYS HIGH PHOTO

She exits after 5 seasons with 68 wins, trio of 2A playoff teams

Editor’s note: This story is copyrighted and historical information on the coaching history of Bandys girls’ basketball can’t be republished or rebroadcast without crediting HobbsDailyReport.com or by having a copyright waiver. To request a waiver, contact Chris Hobbs at chobbs001@att.net.

She met with her players on Thursday afternoon to tell them about her decision, a press release from the Bandys athletic department said. She was a varsity assistant for three seasons before being named head coach heading into the 2017-2018 season.

Brittain’s teams went 37-31 in conference play – highlighted by a tie for second place in 2018-2019 and a second place finish the next year – and the Trojans were 68-47 overall under Brittain.

She coached three teams to the state 2A playoffs, including three of her last four (the miss was in a COVID-shortened year), and the Trojans have made the postseason in 14 of the last 16 years.

Bandys went 7-5 in the Catawba Valley 2A Athletic last season (fourth place) and 14-11 overall, ending the season with a 49-38 first-round state 2A playoff loss at Southwestern Randolph.

The Trojans started the season 5-4 then won the People’s Bank Holiday Classic and their first league game of 2022 before losing three straight games to fall to 9-7. After winning five of seven games, they fell to Newton-Conover in the CVAC 2A tournament semifinals and then to Southwestern Randolph.

“Coach Brittain’s love for the game and dedication to her players is second to none,
Bandys athletic director Brandon Harbinson said in a press release. “Clearly, she will be missed on the court and in the locker room but she will continue to teach math and be a positive influence in the lives of our students.

“We would like to formally thank Coach Brittain for her service to our program for the last eight years, and we are pleased that she will be able to spend more time with her young family.”

Harbinson said the search for a new head coach will begin when schools resumes after the Easter holiday break.

He will fill the position for the sixth time in 11 years and for the 11th time since the late Bill Bost retired as girls’ varsity head coach after the 1978-79 season.

When Queen resigned, the Trojans hired the late Mark Story, and he coached one team (27-3) to the West 2A Regionals.

The next year, Kyle Moretz took over and that team went 31-1 and lost in the state 2A finals to High Point Central. That was the first state title game loss in seven appearances for Bandys.