over Blue Devils as Trojans stay atop league

Editor’s note: This story has been updated after having the last name of an honoree at the game incorrect. HobbsDailyReport.com apologizes for the mistake in the initial post of the article.

CATAWBA — Bandys High right-hander Cade Spencer said he had a good feeling as he headed to the mound on Tuesday night to pitch in a key Catawba Valley 2A Athletic baseball game against visiting Maiden.

He was feeling even better when the game was over, throwing a complete game one-hitter, allowing only two other baserunners and keeping the Trojans (12-4, 9-2) atop the conference standings. 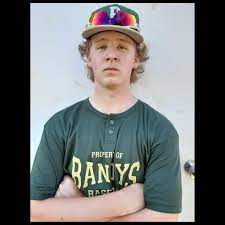 Spencer, a junior, needed only 71 pitches, and the Trojans had nine hits in an 8-0 victory.

He walked none, hit two batters and struck out seven, improving to 7-0 this season with an ERA of 0.88 with four shutouts. He has walked four and struck out 58 in 40 innings.

The victory maintained Bandys’ one-game lead over Lincolnton (10-6, 8-3), a 12-2 winner on Tuesday night at home over West Caldwell.

The Trojans have three conference games left – on Wednesday night at Newton-Conover (7 p.m.), on April 26 at home against West Caldwell and on April 29 at Bunker Hill.

On Tuesday night, Spencer’s control was good all night and the only baserunners for Maiden (7-9, 6-5 and in fifth place) were Nick Jarosynski’s single up the middle in the second inning and Spencer hit Collin Chappel in the third inning and Tyler Hedgepeth leading off the seventh inning.

“Before the game, I felt good,” said Spencer, who helped Bandys reach 8-3 in home games this season. “I felt loose and that gave me a lot of confidence going into a game like that.”

Spencer said he pitched with a simple purpose.

“Throw a lot of fastballs and just trust your defense,” he said. “Do the hard work and everything will take care of itself… Just stay in control and on the fundamentals.”

Bandys came into the game off a 6-4 loss to Lincolnton that wiped a game off the Trojans’ conference lead. But they rebounded well, shutting out the Blue Devils for the second time this season.

Parker DeHart, Nolan Jones and Zach Barnett each had two hits and drove in two runs for Bandys as it won the 10th time in 11 games. DeHart and Parker Stybroski had triples for the Trojans, who now have 44 extra base hits (32 home runs, team batting average of .353).

Bandys head coach Frank Porter told his team after the game to remain focused, and he is confident the Trojans’ pitching and hitting will continue.

Spencer had one of his better games, Porter said, or at least the type game Porter loves.

“He got a lot of groundballs and flyball outs,” Porter said. “He likes (more) strikeouts but I’d much rather see this.”

With Terick Bumgarner also pitching well, Porter said Bandys can be in every game.

“We’ve got two good guys and they are consistent,” Porter said. “That makes it much easier when you can run two good guys out on Tuesdays and Fridays.”

After playing at Newton-Conover, the Trojans will be in the Shelby Easter Tournament next week and then back to the CVAC 2A race.

“We can’t worry,” Porter said. “We just got to go pitch, play defense and hit when we have an opportunity. If we win out, they (other league teams) can’t do anything about it.”

The Trojans took care of business with Maiden early, scoring all the runs Spencer eventually needed in the first inning.

DeHart led off the game with a single to left and Jones sliced a line drive inside the third base line. Both runners scored when Barnett hit a high chopper over the head of first baseman Quinn Rembert.

Blue Devils lefty Elijah Miller pitched out of a second-inning jam after Maiden made the first of its six errors. He struck out Jones and got Stybroski on a flyball out with runners at second and third.

Bandys scored twice in the fifth on a RBI double to left by Barnett and a throwing error on shortstop Brenden Harrison.

A four-run sixth inning secured the Trojans’ sixth shutout of the year. DeHart tripled in a run, an error on second baseman Ethan Whitaker scored a run and Stybroski tripled for a run before a throwing error on Whitaker scored the eighth run.

Eight runs for the Trojans was modest as they had 10 or more in eight games during a nine-game win streak snapped by Lincolnton.

Bandys has outscored opponents 133-31 this season.

Spencer said things feel right and his confidence level is high that the Trojans will win the CVAC 2A regular-season crown.

“Yes sir, 100 percent,” Spencer said when asked if Bandys will close it out. “I think we’re just gelling as a team. We’ve each got the others’ back. We trust each other and that is a big thing to have” 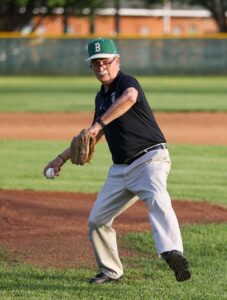 Benny Lytton, honored by Bandys High on Tuesday night for his service to the school’s athletic program for more thn 30 years, throws out the first pitch before the Trojans battled Maiden in baseball./PHOTO COURTESY OF ADAM DUTKA

Notes: Bandys honored Benny Lytton — who has provided more than 30 years of service to the school as a multi-tasker support person (PA, sports information, game music, pre-game coordination for multiple sports) – in the third inning… Lytton, a 1964 Bandys graduate, is 76, and he threw out the first pitch on Tuesday night… Lytton said he plans to continue in his role a bit longer. He had planned to retire after this season but has been convinced by school officials to stay in the program two more school years… The school presented Lytton with an inscribed green baseball bat that is encased … Spencer was especially effective in the fourth and fifth innings, needing only five and six pitches, respectively, to retire the Blue Devils. He threw 32 pitches over the final two innings…The Trojans’ first opponent at the Shelby tournament is Kings Mountain on Tuesday (4 p.m.); Crest and South Caldwell are in the opposite bracket…Bandys has won at least 12 games in 14 of the last 26 seasons and is now 135-133 under Porter, who is in his 13th season… Maiden’s remaining league games are at home Friday against Bunker Hill, at home against Lincolnton on April 26 and at Newton-Conover on April 29… The Blue Devils will play next week in the Tony Causby Classic at Patton, facing R-S Central on Monday (2 p.m.), the winner or loser of Chase-West Caldwell on Tuesday (11:30 a.m. or 4:30 p.m.) and a game on Wednesday based on results from the first two days (title game is Wednesday at 7 p.m.)

Miller and Smathers. Spencer and Edwards.