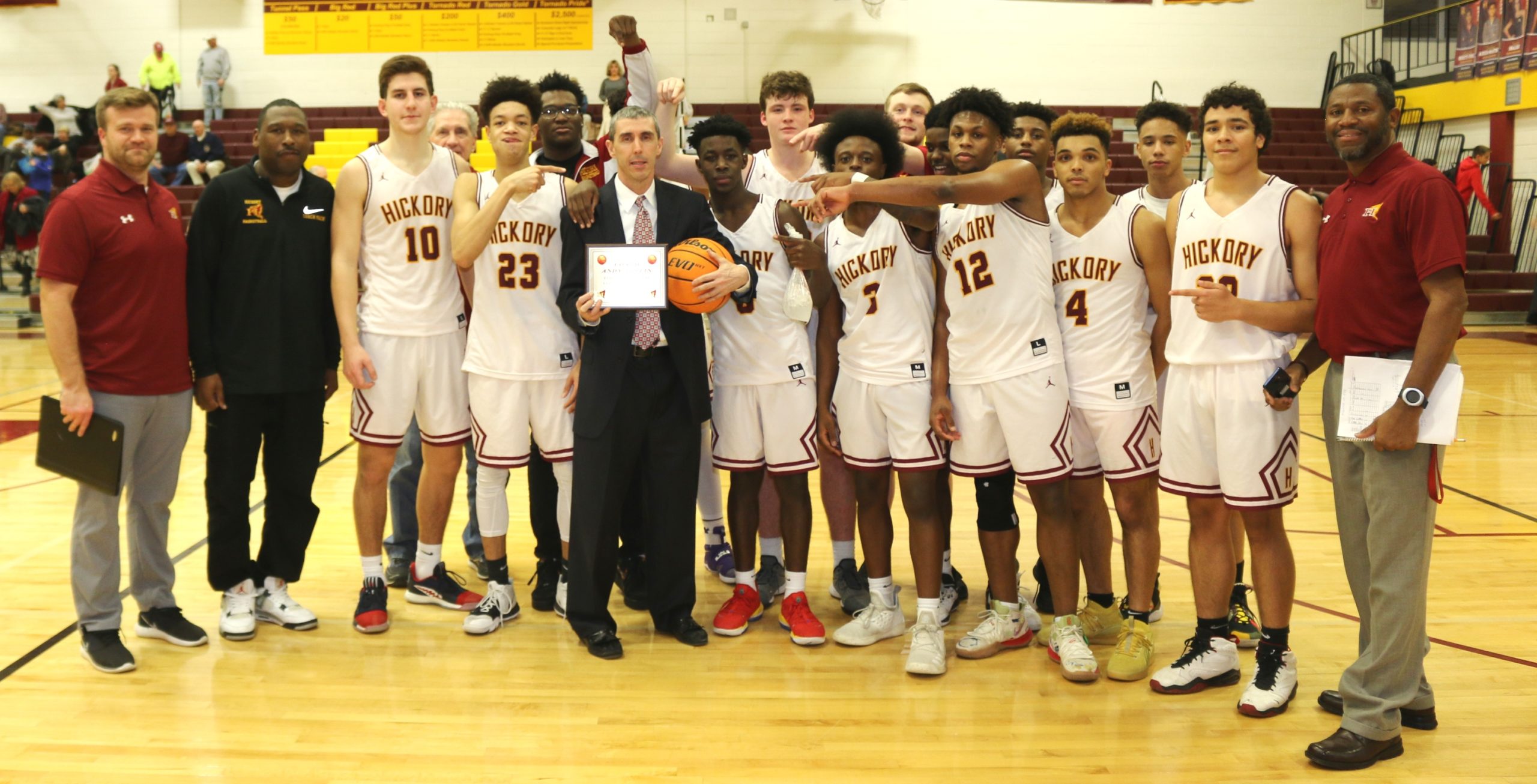 Andy Poplin (center) with his Hickory High varsity boys’ basketball team after reaching 350 career wins in a home victory over McDowell on Jan. 23. He coached the Red Tornadoes to a 158-40 record over seven seasons and is returning in August to his native Cabarrrus County to be head boys’ basketball coach at A.L. Brown./HICKORY PUBLIC SCHOOLS PHOTO

KANNAPOLIS – Andy Poplin is leaving Hickory, returning to the county he grew up in to coach the varsity high school boys’ basketball team at A.L. Brown.

Poplin — whose head-coaching career includes stints at Cabarrus County’s Mount Pleasant and also at Concord, his alma mater – will return to coach at A.L. Brown in August.

He’ll replace Shelwyn Kluttz, a 300-game winner with the Wonders (21-8 last season), who is retiring.

Poplin, 49, told The Charlotte Observer: “I have been a Cabarrus County guy most of my life. So I am really excited. I really loved the (South Piedmont 3A) and there’s some great coaches in our conference and since I left, Cabarrus County basketball has continued to take off.”

Poplin, a Lenoir-Rhyne University graduate, began his coaching career in Catawba County as an assistant coach at College Park Middle School (1989-92). The next year, he was a varsity assistant at West Caldwell High.

His first head-coaching job was at Mount Pleasant, starting in 1994-95, and he was there nine seasons before going to Concord as head coach for four seasons.

In 2005-06, Concord fell to Greensboro Dudley in the state 3A title game. The next year, the Spiders beat Kinston to win a state 3A title.

He was hired as Hickory’s head coach prior to the 2013-14 season, replacing Lavell Hall after he’d spent one year as Red Tornadoes head coach.

Poplin’s first Hickory team went 13-12 overall, and he leaves HHS with a record of 158-40 that includes two league titles, three second-place finishes and one third-place finish.

Last season, HHS was 22-6 overall and second (9-3) in the Northwestern 3A-4A behind Freedom after falling 73-54 to Freedom in the third round of the state 3A playoffs.

Freedom also beat HHS last season in conference games in Morganton (by 12 points) and in Hickory (by seven points).

Poplin’s eventual replacement at HHS will be the ninth head coach of the Red Tornadoes since the late David Craft Sr. retired after the 1984-85 season.

The Red Tornadoes’ current streak of winning 20 or more games is at six years and in 12 of the previous 13 seasons.