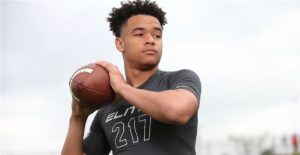 Birchfield, who came in already having thrown for nearly 1,200 yards and 14 touchdowns, broke a 7-all tie on a 23-yard scoring run before throwing 81 yards for a TD to Dezmond Caldwell that opened a 21-10 in the opening half.

Freedom had more than 550 yards on offense, with Birchfield throwing for nearly 220, and the Patriots’ defense held HHS to fewer than 80 yards.

Hickory wide receiver Jaylen Harper had two TD receptions and almost 150 yards in receiving yards in the loss as HHS fell to 3-8 in Morganton since 1980.

The Red Tornadoes, 9-9 under second-year head coach Russell Stone, play league-leading and unbeaten Watauga in Hickory on Friday at 7:30 p.m. in a conference game.

Freedom, which lost its opening game of the season 31-21 at Shelby, has a key conference game Friday at 7:30 p.m. in Taylorsville against Alexander Central.

Alexander Central was undefeated when it played Friday at Watauga and fell 35-0.