East nips West despite 17 saves by Foard star who 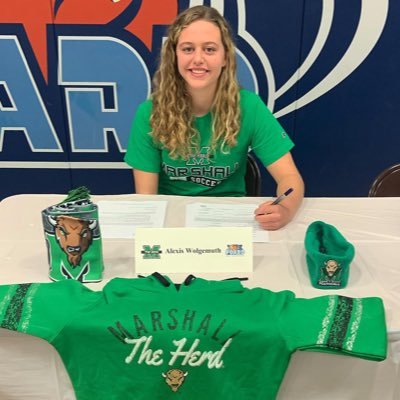 Fred T. Foard High’s Alexis Woglemuth, who has signed to play soccer at Marshall University, closed her sterling high school sports career on Tuesday night, winning MVP of the East-West All-Star Game even though the West fell 1-0. She made 17 saves/FACEBOOK PHOTO

GREENSBORO – Fred T. Foard’s Alexis Woglemuth closed her high school athletic career in a way that solidified a spot in any debate about the best female athlete of the last 50 years in the Greater Hickory area.

Playing in goal for all 80 minutes for the West All-Stars, Woglemuth made 17 saves in a 1-0 loss to the East and was named the match’s MVP. She had nine first-half saves and eight in the second half.

The East scored at the 54:27 mark when Laura Westerbeek (Raleigh Athens Drive) converted on a breakaway on an assist by Wilmington Hoggard’s Maggie Stephens. The play was to the far post of midfield on a lead pass.

Other than that goal Woglemuth – who has signed to play soccer at Marshall — did as much as she could to control the match. The East outshot the West 30-2 and had eight corner kicks to none by the West.

The statistics for the other three West players were: Deana Poteat of East Lincoln (66 minutes), Cambell Vander Haar of East Lincoln (80 minutes) and Hickory’s Madeline Mosteller (52 minutes, shot one goal).

Woglemuth added a match-to-remember finish, adding to her laurels that surpassed even the high expectations of her arrival for girls’ sports at Fred T. Foard. Her mother is Jen (Howard) Woglemuth, a multi-sport star at Foard who then went on to star at N.C. State in women’s basketball.

Foard was 46-10-8 with Woglemuth in the soccer lineup, posting 42 shutouts and her goal against average was 0.35, and in tennis she won four state titles (two singles, two doubles). 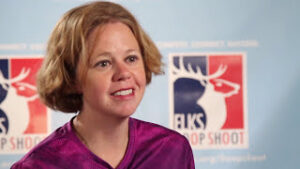 Jennifer (Howard) Woglemuth was one of the best female athletes in the Greater Hickory area while playing at Fred T. Foard High. She then was one of the top ACC basketball players at N.C. State and reached the WNBA with the Cleveland Rockers. She and her daughter, Alexis, would be part of any debate about the area’s best female high school athletes./ELKS HOOP SHOOT PHOTO

Jen Woglemuth is on the North Carolina High School Athletic Association (NCHSAA) “100 To Remember” selection list of the state’ top female athletes. She played basketball (point guard with above all else great ball-handling skills) and participated in track and field from 1988-89 through 1992-1993 for the Tigers, scoring 2,054 points in basketball.

Foard went 29-1 her junior year and won a state 3A championship, drawing attention from N.C. State. She helped the Wolfpack make three NCAA appearances and twice had games in which she made nine 3-pointers.

After college, she joined the WNBA’s Cleveland Rockers in 1999 as an undrafted free agent. She played four June games, averaging nearly four minutes per game, and did not score.