TAYLORSVILLE – Jon Presnell — a former Alexander Central High basketball player who last coached at the school in 2000 — has been named head coach of the girls’ varsity basketball team.

The Cougars announced his hiring on Wednesday via a press release, after the Alexander County Board of Education approved the move on Tuesday night. 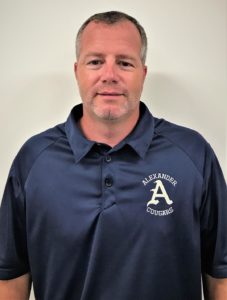 Presnell, employed as Alexander County’s Director of Parks and Recreation since 2000, will serve as a non-faculty coach.

Principals make all coaching assignments and local boards must approve the appointment of any non-faculty coaches and/or approve a teaching contract for the coaches selected by administrators if they are faculty members.

“I would like to thank ACHS Principal Gordon Palmer and ACHS Athletic Director Nathan Robinson for allowing me the opportunity to lead the (girls’) basketball program here at Alexander Central,” Presnell said in a press release. “I am grateful for the confidence they have in me to hire me as the next head coach.

“I look forward to the challenge of building a strong basketball program as well as working with everyone involved.”

“Jon is a high character individual with a wealth of basketball knowledge,” Robinson said in the press release. “He has been around basketball pretty much his entire life, and I feel that he will do an excellent job helping our young ladies try and reach their potential on the basketball court.”

Presnell will be introduced the players, parents and the school community on Thursday at 6:30 p.m. in the school cafeteria.

He will inherit a team that went 2-23 overall and 1-13 in the Northwestern 3A-4A, finishing in eighth place.

Presnell is the ninth varsity girls’ coach at Alexander Central since 2000.

Before going 4-20 in Winkler’s first season (2017-18), the Cougars had their best run in the last 40-plus years by going 132-41 over a six-season stretch that included six state playoff appearances, four 20-win seasons and the school’s only West Regional bid in girls’ basketball (2011-12).