Assault on female fan among charges against

Chad Wright after game against Newton-Conover

Chadwick Rock Wright, 48, won’t coach Friday night’s South Fork 2A game against visiting Lincolnton. He has been suspended by the school system after facing misdemeanor charges of assaulting a fan after the Rebels’ game at home on Tuesday night. 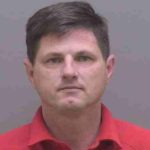 In a press release, the Lincoln County Sherriff’s Office said Wright ran into the stands after Newton-Conover had won 63-28 and struck a man in the standings. A female then began taunting Wright, the press release said, and she was pulled into the affray.

Deputy S.W. Edwards worked security at Tuesday’s game and reported he heard a fan yell at Wright as the coach left the floor after the game. The deputy indicated one individual in a group of about five or six people raised their hand and said they made the remark.

The press release said that’s when Wright ran into the stands.

After deputies got Wright into custody, he was transported to the Lincoln County Magistrate’s Office where he was charged with one misdemeanor count each of assault on a female, simple assault and battery and disorderly conduct.

West Lincoln is 0-13 this season and 0-3 in the South Fork 2A, extending losing streaks of 58 straight games overall and 32 consecutive regular-season league games.

Wright is in his first season as the Rebels’ head coach. They went 0-24 a year ago under Kyle Cornwell in his only season as head coach and they were 1-22 in 2017-18 and coached by David Handsel.

Entering this season, West Lincoln had posted a losing record in 37 consecutive seasons since going 20-7 in 1981-82.