Whether she will coach basketball again yet to be clarified

NEWTON – Sylvia White — whose third tenure as head girls’ basketball coach at Newton-Conover High ended on Thursday night — retired from her administrative position with the Newton-Conover City Schools on Friday.

White exits her position as Executive Director of Operations, and the school system has not indicated if the position of head girls’ basketball coach is now open.

The school system’s human resources office said this week that White’s resignation had been accepted by its board of education in an earlier meeting, effective at the end of the basketball season.

Under state retirement regulations, a retiree must be out of state employment for six months before being eligible to return.

White has not officially commented on anything basketball-related in her retirement, only saying she would leave her school system employment when the season was over.

Newton-Conover athletic director John Echerd had no comment on White’s retirement when contacted this week by HobbsDailyReport.com.

Aron Gabriel, superintendent of the NCCS, did not return phone calls from HobbsDailyReport.com this week.

Top-seeded West Stokes eliminated the visiting Red Devils 59-41 in a second round game in the state 2A playoffs on Thursday night.

Newton-Conover finished 15-1 this season and went unbeaten in the South Fork 2A for the third straight season. The Red Devils have won 48 consecutive league games.

White’s career record is 218-79 in 11 seasons, all at Newton-Conover and over three tenures.

After two seasons as an assistant at Newton-Conover under Jerry Willard, White was named head coach for the 1988-89 season. Her teams went 113-12 in four seasons before she resigned to become head women’s coach at Mars Hill University. 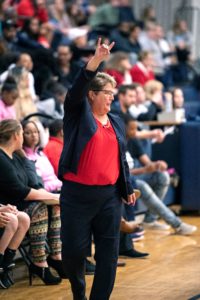 She coached Mars Hill from 1992 through 1998, winning women’s coach of the year in the South Atlantic Conference (SAC) in 1996.

White served as athletic director and taught physical education at Crestdale Middle School in Matthews from 1998-2000 before returning to Newton as an assistant principal at Newton-Conover from 2001-03.

Named principal at Newton-Conover Middle School in 2007, White went to the central office in 2007 as Director of Human Resources.

White’s second tenure coaching the Red Devils began in 2000-01, as he took over a team that won 15 games the year before. They went 0-20 and 6-18 in her first two years back, then went 17-12 and lost in the first round of the West 2A Regionals to Salisbury.

In her first year back, the Red Devils went 25-5 and lost in the third round of the state 2A playoffs to East Burke. The next year, they were 29-1 and co-state 2A champions with Farmville Central after COVID-19 prevented a state title game.

This season, the Red Devils opened with a 52-39 victory at Bandys on Jan. 7 and went unbeaten (14-0) in conference play for a third straight year.

Newton-Conover won at Canton Pisgah in the first round of the state 2A playoffs on Tuesday (57-46).