Staph breakout left Bears without 2 players in win over Lincolnton

Editor’s note: Content on HobbsDailyReport.com is copyrighted — including information in graphics – and can’t be republished or used in any form of broadcasting or social media without crediting the website for its research and compiling the information. To request a waiver of the copyright, contact chobbs001@att.net.

— One player ejected from the North Iredell game on Sept. 2 and one player who had a reaction to the disinfectant used to clean shoulder pads did not play against Lincolnton.

— The two players with staph, which triggered the cleaning of shoulder pads, were released by their doctors and played against Lincolnton. 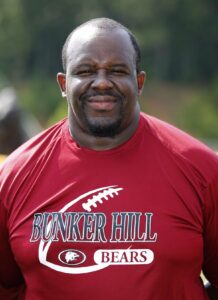 — As of Monday, no Bears are expected to miss the West Caldwell game due to staph infection. There is uncertainty about one player’s availability due to the reaction from the disinfectant.

— The home junior varsity game against West Caldwell (7 p.m.) on Thursday will be played. The JV game missed against Lincolnton is a forfeit by Bunker Hill.

Bunker Hill is 15-2 since Albert Reid became head coach and is in the chase for a CVAC 2A title.

The Bears last won an outright title in 1968 and shared a league title in 1980 with Maiden.